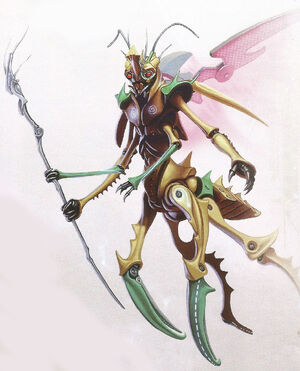 The Otolins are an intelligent alien race native to the Phaeton Halo.

Otolins resemble very large beetles or other large insects, bearing wings made from cut-synth and abandoned automaton parts. They range in size from half that of a human to more than double or even triple their size. Despite their otherwise biomechanical chemistry, otolins are still able to move about with the fluidity of completely organic lifeforms. They even tend to dye their outer components with bright colors or even illuminated spirals and lines.

Otolins can move through outer space by literally pushing against the fabric of existence via their metallic wings. When spread and active, the underside of their wings emit a rose-colored glow, with propulsion following suit. [1]

During youth, otolins are formed from a careful infusion of selected parts from a quad family of adults. Despite their techno-organic minds, unlike the ghru, young otolins don't start their existence with all the knowledge of an adult. Rather, they'll follow adults around and spend time learning for the first several years of their life. They're born with an instinctive knowledge regarding the numenera, and rely on said knowledge to replenish their bodies. Because their bodies vary in construction, the variance causes a specialization in skills and abilities. Otolins don't evolve over time but rather become smarter, stronger, and more powerful versions of themselves. While they could self-evolve themselves via ancient devices from across the Halo, it's usually considered to be a taboo.

Stories of those who self evolved themselves are used as object lessons for younger otolins, turning from otolins into monstrosities or aberrations, usually going insane as well. The otolins. sometimes referred to as "the fallen", often times needed to be put down or exiled. It's said that some of their number still exist along the outermost, darkest edges of the Halo. Unfortunately, such a desire to self-evolve still remains a temptation among some otolins, despite the moral consequences.

Despite all the internal and external dangers involved with being an otolin, many otolins are actually upbeat and even optimistic. They understand that enough raw material - parts for repair and broken machines to drain power - lies amidst the remains of old Phaeton to allow their kind to thrive for perhaps several hundred million more millennia or so. Looking ever towards the future, they always find time to investigate any new big structure that comes across their path and take delight from what the next cycle of offspring might bring to their family.

Otolins are known for speaking over a range of machine channels and are capable of making themselves understood by practically any sapient creature they come across, whether it be through direct message signaling or by causing a piece of tech in the possession of strangers to begin speaking on behalf of them. Once an otolin learns a new language (and they have learned the Truth, among many other languages, long ago), it doesn't take too long for others to pick up on said skill too. However, other kinds of skills won't usually spread between individuals so quickly, with communication being the only known exception.

Otolins tend to spend months or even years at a time alone within their own red, crystalline loneshells, vessels crafted from void snail shells approximately 20 ft. in diameter. A loneshell contains all the necessary provisions an otolin would need, such as prospecting gear (including any ancient devices with hypersenses), and an engine an engine that works in a similar way to how an otolin would move throughout space. However, loneshells can move much faster.

Otolin prospectors, during times when they don't sap energy from spare machinery, return home to their community These communities are formed from loneshells tied together via tether, separating them from the otherwise confining, dreariness that is the Halo. These communities are known for staying in place fro long periods of time, and despite an underlying mobility that loneshells may in fact possess, communities can retain their titles, as well as their location, no matter if some choose to leave, for years to come. As a result of finding safe ares to shelter from environmental disaster, the otolins have mapped much of the detritus storm paths.

Each of their communities holds an agora that usually takes the form of some massive void snail shell, discarded home, sphere, or even vessel that was discovered wandering about Phaeton. They serve as gathering spots for otolins, where they can chatter on about stories, songs, or even wildly-patterned anecdotes that some Ninth Worlders might take as jokes, all while passing around containers carrying green rocks that give off ample amounts of radiation. Unfortunately, the is particular radiation can prove to be a little intoxicating for biomechanical beings such as the otolins. Many of these communities hold a midwife or two, an highly respected position that involves taking particular machines uncovered by the prospectors and turning them into carapace components. The artifacts provide individuals with various abilities and serve as the very foundation of otolin society.

It should be noted, though, that any otolins that have gone away fro extended periods of time will one or more pets for companionship, ranging from oddities to partially-living machinery. They can be as simple as providing minimum affection through movement and song to as complex as smaller-looking versions of themselves, following around and capable of greater love. Then there are the rare types of pets that include organic flora or the occasional small critter contained within a small, portable biosphere, purchased exclusively from Ghamalso the Collector.[2]

Otolin society has no fixed number of genders, however, 5 tend to be most common. 4 of that number are usually required to bring a new otolin to birth. These genders don't exactly map congruently to those of humans, and even their names don't translate well. Despite this, humans that meet otolins often default to using such pronouns as "he" or "she" when referring to individual otolins. Interestingly enough, many otolins don't mind this, and actively encourage it.[3]

Loneshell walls are considered as level 8 for the purposes of either breaking, cutting, or penetrating through.[4]