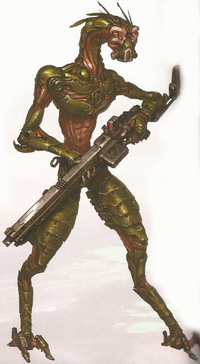 Oorgolian Soldiers are cyborg infantry that scour the Ninth World.

Created aeons ago (perhaps on an entirely different world), the mechanical men known as Oorgolian soldiers patrol isolated areas of the Ninth World, particularly the Plains of Kataru and Scorpion's Reach. They're almost always found in groups of 1d6 + 2. Lanky and alien in their movements, these quasi-humanoid automatons stand almost 8 ft. tall. In their fingered hands, they can wield a variety of weapons.

No one really knows the origin of the term "Oorgolian." It's thought to be a word from a tongue that's now long deceased.[1]

Anywhere, though usually in groups of three or more

Perception as level 5. Leaps, runs, and balances as level 6

Oorgolians will attack in groups using well-organized tactics. Although they can speak, they usually transmit information to one another silently and instantly within a 100-mile range via radio transmissions. Originally they were almost certainly outfitted with numenera weaponry, but about half have lost their armaments and now wield Ninth World weapons, such as spears, crossbows, or even axes. The Oorgolians still armed with the numenera typically carry a weapon that can fire multiple rapid shots without reloading. The soldiers use these to fire at up to three targets (all next to one another) at once. For each target after the first, defense rolls are eased.

In addition to a ranged projectile weapon, one in four Oorgolians will carry a back-mounted device that hurls detonations at long range with deadly accuracy. They explode in immediate range for 4 points of damage. Each device holds 1d6 detonations.

People who have experience fighting these automatons have discovered that certain frequencies of sound can confuse them. Some frequencies can even cause Oorgolians to function at 2 levels lower than normal, and others prevent them from acting at all for 1d6 +1 rounds.

At least one human warlord, with the help of his skilled scholars and Nanos, has captured and repurposed a number of Oorgolian soldiers, probably using sound. These soldiers remember nothing of their former duties and work for their new human masters.

Half of all Oorgolian soldiers carry artifact weapons, such as a slug thrower - a two-handed weapon that inflicts 6 points of damage and has a range of 200 ft. The projectile ammo regenerates within the weapon until it runs out of power (depletion 1 in 1d100). In addition, each Oorgolian body can contain 1d6 cyphers.[2]

Among those who had the bad luck to encounter Oorgolian soldiers (but also the good luck to survive), most believe that the creatures weren't created by human hands.[3]