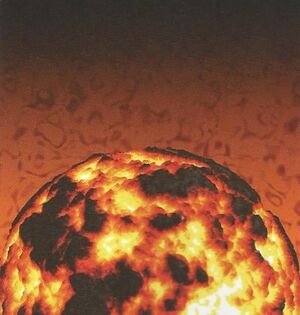 Nylaran is mysterious fortress located somewhere within the Oort Cloud.

Located on a tiny world adrift in a cloud of similar tiny worldlets, ice chunks, dead comets, and rubble is the fortress of Nylaran, if fortress it is. From here, the sun is visible as just another star in the ocean of night. Nylaran is a towering structure of scarlet synth resembling the whorled shell of a sea creature of Earth, if the shell were inscribed with all manner of tiny script and symbols.

Creatures who call themselves Vendul inhabit Nylaran. The Vendul are sapient beings composed of extremely cold fluid, a superfluid Helium. They interact with each other and their environment through telepathy and mind over matter, but they find it difficult to deal with creatures born closer to the sun. The temperature of such intruders is annoying and potentially dangerous, and Vendul will not abide their presence for long.

Contact with the exterior of Nylaran translates any creature - whether machine or automaton - and its equipment into a life form similar to a Vendul. Creatures who undergo this experience must succeed on a difficulty 3 intellect defense roll or essentially go insane for a period of several minutes, after which they return to their normal form and state of mind. Upon taking Vendul form, a creature that retains its mind discovers that Vendul senses are exceptionally acute, and one of the first things a transformed creature notices is the thousands of tiny channels that penetrate the surface of Nylaran. A Vendul can use these channels to flow between the exterior and interior of the scarlet tower.

Nylaran's interior is an immense supercooled pool, swirling like a vortex around a central ebony-hued crystal. The pool is made up of all the Vendul currenty within Nylaran, joined into a communal being of vast intellect and memory called Ny. From day to day, the number of Vendul making up Ny vary, but for the most part, the communal being retains continuity. A Vendul (or a creature temporarily transformed into a Vendul) who enters the communion and later leaves it remembers being swallowed by a vast collective , and possibly recalls an important piece of information gained from being part of a superior intellect. The Vendul of Ny are concerned that a relatively nearby star - actually an "Ultracompact Stellar Corpse" - is soon to undergo a paroxysm that will release an intense burst of energy far enough across space to irradiate all things within the grasp of Earth.[1]