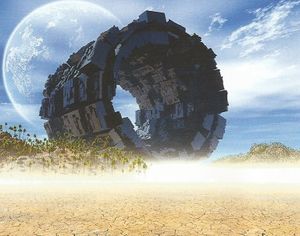 Nullen is a distant, quiet, and unremarkable world that lies at the edge of the galaxy.

Upon the planet's surface lies The shell of some giant structure. This ruin is approximately 1.5 km long and more than 3,500 ft. high. It's highly likely to have been either a vessel or simply a stationary structure that floated throughout the air, perhaps even through outer space. Regardless of its original capabilities, however, it seems, based on the surrounding terrain, that the object may have crashed many years ago.

Its interior is set up so that gravity will always emanate along its exterior. Meanwhile, the interior itself is covered in plazas, buildings, and streets. On the other hand, the exterior shell itself is honeycombed with small, winding tube-like corridors that can simply lead to cramped chambers. The ruined structure was scavenged by unknown forces, but useful material for numenera hunters are still present for those who look hard enough.

However, much of the shell as well the interior structures hold a pale orange slime mold that can react to movement. Once it senses any, it begins to expand quickly and can entangle a single human and suffocate them if they happen to fail a speed and might roll respectively. They can also escape by standing still for five rounds. Two or more creatures moving within immediate distance of each other can set the slime off and cause it to grow large enough and seal off the whole doorway, corridor, street, etc. Disintegration us the best way to clear out the slime mold.

The shell of the structure lies along the edge of a sea with water that is deadly to humans. The air is deadly to breathe too and those doing so suffer 1 point of damage per round. A breath recycler, envirosuit, or anything similar are required for this world. However, most of the planet's climate is tropical in temperature and precipitation, with the poles being predictably cold.

If one views the structure from the inside, they would notice that it was damaged amidst a great war that took place among the stars thousands of years ago. A period when the Suhlacil attempted to wipe out all other life across the galaxies.

Currently, no intelligent life seems to exist on Nullen, nor upon its large, only moon, despite the latter being more friendly to earth-like lifeforms. It's speculated that another, perhaps undisturbed structure exists upon its surface.[1]