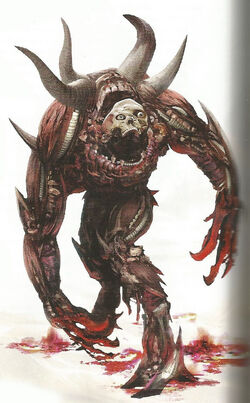 Stalking across the worlds, nildirs are creatures of endless hunger who slip between the folds of reality to hunt literally everywhere for their next meal. Once human, nildirs - also called planar cannibals - were exposed to one too many transdimensional transitions, planar bleed-through, and perhaps even shocks their ego. Mutated and hungry, planar cannibals hunt humans, abhumans, other beings with knowledge that seasons the flesh, though anyone will do. Whatever mind or personality the nildir once had before its conversion is long gone, even if some of the memories still remain. Once changed, it's probably impossible that a planar cannibal could ever be returned to normal.[1]

Might defense rolls as level 6. Runs, climbs, and jumps as level 7.

A nildir will tear at prey with its powerful claws until they're incapacitated, then attempts to steal their dying body to an alternate dimension, there to dine on the still-living flesh in piece.

As a being of disrupted dimensions, dimensional bleed surrounds the planar cannibal like a halo. Each round, disquieting emotions, sounds, visions, and even physical objects appearing out of nowhere can afflict foes. Generally speaking, these effects increase the difficulty of all attacks and defenses against the cannibal by one step, though the GM can also choose to apply specific effects.

As its action, a nildir can move into an alternate dimension, usually one it has previously visited. It leaves behind flickering footsteps that can be followed for one round if pursuers are quick enough ( a level 5 Speed task).

Though once human, planar cannibals act mostly like animals.

Characters investigating a site of transdimensional activity, or who are traveling themselves, are attacked by a nildir. It might even be recognizably someone who they once knew to be a dimension walker, if applicable.[2]