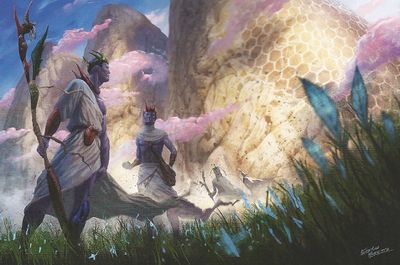 New Yenth is an alternate universe, connected via portal to the Ninth World city of Yenth. It is also the domain of the Colrathi.

The trade city of Yenth in Malevich enjoys its status thanks to a transdimensional portal linking it with a parallel universe - specifically to a cognate planet that's very different from Earth. Odd flora and fauna exist throughout this world, but humans can survive within it. In fact, its home to small cloisters of humanoid beings called the colrathi. Despite their human-like shape, the colrathi's motivations are alien; even when communication is established, its difficult for the natives to completely understand them. The people of Yenth have established a trade network with them, and have since dubbed the colrathi homeworld "New Yenth". The term the colrathi use for their world is a series of clicks and whistles, nearly impossible for any human to duplicate.

Yenth is built around a complex of aeons past that houses a large extradimensional portal. As far as anyone can understand, it can be only opened from the Earth side. A guild that operates from out of Yenth called the Openers serve as gatekeepers for the portal. Under normal circumstances, four Openers will monitor the portal. However, for reasons still being studied, on rare occasions, all the Openers guarding the portal will go missing, discovered only when the next shift arrives. Those that vanished will sometimes show up again a few months later, but by all accounts, they're never the same. As with any other dimension, other methods can also be used to reach New Yenth.[1]

Almost everything in New Yenth is some species of insect, including the plants. Fields of waving grass are, in fact, antennae of tiny creatures rooted within the soil who remain as long as conditions are favorable. Trees that dot the landscape are actually mounds of mud built by thousands of tiny ant-like creatures. The darting flocks of birds in the sky are actually any of a hundred different variety of wasp. The massive, waving yellow shapes that billow across the sky aren't clouds; they're actually membranes filled with buoyant gas created by colonies of tiny insects that live inside, called Dalds. When dalds swarm, a voracious storm threatens, and most creatures will retreat into their lairs. Weirdly enough, the colrathi seem - at least at first glance - to be the exception of this theme. aside from the dalds, other aggressive fauna include:

• Manitura - predatory creatures nearly as large as a human with long, carapaced bodies and mandibles paired with cleaver-like forelegs.

• Ephemers - beetle-like creatures the size of carts that leap onto prey by utilizing forced-air jets to make long jumps.

• Noptera - huge insects that swim through the ground, searching for prey along the surface.

• Lycidarises - A region called the Shrouded Kingdom, is infested with them. The creatures' pale, stringy gauze-like nests smother the region under layer upon layer of webbing . a group of colrathi called the Watchers keep said infestation at bay.[2]

• Citadel of the Watchers

A trader within Qi named Iakgo seeks to find the source of oddities that emanate from Yenth. The oddities, including jumping beans, rattling rods, and kaleidoscopic amber eyepieces, also appear to exert an influence over common earthly insects.

A crawling one has infested the prior-world installation containing the portal to New Yenth. It has killed all of the Opener guards and left behind their skins stuffed with a rubbery mucus, posed as if still on guard. The Openers will pay a reward for whoever will slay the creature.

The order of Ambassadors to New Yenth realize they know virtually nothing of the world through the portal. They say that they'll provide aid to any who come from that alternate dimension willing to spend several months telling stories of their world, but are really more interested in how humans interact and deal with relationships.

Red clouds are rare, but when they move across the sky, strange music echoes down from them, bestowing strange dreams of a barren world without life to any creatures that listen to it.

A colrath from a distant settlement claims that a crawling one has taken control there, but rather than instituting a reign of terror, it instead speaks of peace, joy, and of a coming, wondrous event where crawling ones and colrathi will be together reunited.

Huge bodies of disturbingly convoluted carapaces and a nest of rotting tentacles have been uncovered inside a chamber on the Earth-side of the prior-world installation containing the portal to New Yenth.[3]

For Openers, operating the portal is a routine task, For anybody else, the operation of the portal would be a difficulty 6 Intellect task.[4]