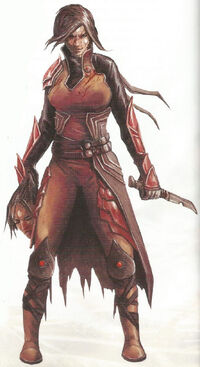 What if the mere sight of something could kill you? Posing such a question as a thought experiment is harmless. Unless you inhabit the dimension of Celerillion, where the idea of something and its literal reality is one and the same. And maybe that's how the horrific neanic came to be . IT drains the mind dry merely by being observed. The few who've survived an encounter with a neanic describe it as a warped, shadowed, and malicious version of themselves, showing them everything they most detest. If viewed by several people simultaneously, the neanic becomes all the more horrific as its flesh writhes and bubbles to simultaneously reflect that which those who see it hate most in themselves.[1]

Eradication of other minds

Anywhere in the dimension Celerillion

Teleports up to a long distance each round

Each round any character within short range clearly sees the neanic and fails an intellect defense roll, victims suffer 5 points of intellect damage (ignores armor). This mind-draining effect persists for one round after a creature who glimpsed a neanic ceases to view it, whether because they turn away, close their eyes, or something else occurs - or because the neanic is killed.

A character could choose to avert their gaze while attacking a neanic, which increases the difficulty of their attack by two steps. the creature doesn't physically attack its foes, but it does stalk after those who run from it, and attempts to teleport itself back into a victim's field of view.

Neanic's don't seem to be conscious in the same way characters are, though they do recall the memories a character hates most, and they throw those back in the character's face if negotiations are attempted. Ultimately, all such interaction fails to prevent a neanic from attepting to eradicate whomever it encounters.

A breach in reality after a particularly powerful use of a detonation (especially a detonation using transdimensional or some other exotic energy) lets a neanic through into the base dimension.

Neanics can journey into other dimensions and retain their lethal nature, but only if compelled by some other force. In at least one recorded instance, a magister of the Convergence used a neanic as a tool of assassination.[2]