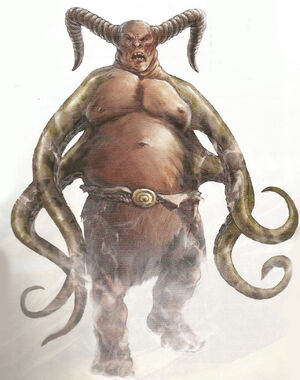 Navesahs are ultraterrestrial monsters that hunt those who travel across dimensions.

Navesahs are demons drawn to creatures and objects that have recently traveled transdimensionally, though why they only started appearing recently is anyone's guess. They look like a horned, ridged, only partially humanoid creature with several sets of arms, or perhaps tentacles. Because they gradually "smear" into existence, it's difficult to describe them with precision. While smeared, they're almost, but not completely - intangible, which makes damaging them difficult. Most of the time, PCs have little to fear from a navesah. However, if they have recently traveled to the dimensions, or they're currently in a dimension other than their home one, a navesah that finds them attacks. It eats portions of the brain of any victim it successfully kills.

Hungers for the brain matter of dimension walkers

Nearly anywhere alone or in groups of 2

Attacks and defense as level 5.

A navesah fights with its horns and ridged tentacles, seemingly metallic claws. a navesah's not quite intangible sate always works in its favor.So when a navesah attacks as if it were level 5, it ignores Armor. Likewise, when i'ts attacked, its partially intangible state means that it defends as if it were level 5 and at any time it's hit, it takes only one point of damage.

It can pass through solid matter at an immediate distance per round, but solid energy barriers, such as force fields, keep it at bay.

If it defeats a victim, it cracks open the skull and selects the brain matter it needs, which apparently allows it to travel into an all-new dimension.

Interaction with navesahs isn't impossible, but it's difficult. It will respond to telepathic contact, but it seems to see the many worlds much differently than a human mind - more as a long road along which various treats are laid out like mile markers. Pulling the navesah along toward a transdimensional meeting of others of its kind many years from now, but getting closer all the time.

Local stories tell of a demon that "guards the gate" of a prior-world installation that's sometimes there, sometimes absent, as if the entire structure fades into and out of reality.