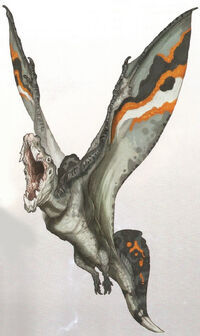 Navaracs are flying, reptilian creatures native to the Swarmstar that despise all humans.

Navaracs hunt down humans. Sure, they kill and eat prey of all kinds but somehow seem to have an almost irrational hatred toward mankind. Although these flying reptiles aren't very intelligent, they do possess a sort of cunning that can make them terrifying hunters. They can be awkward when not in flight, but that happens rarely on occasion.[1]

Hungers for flesh, dislike of humanity

Long when flying; short when not

Stealth and perception as level 6.

Navarac will attack with a vicious bite. They also use torn loops of mantle filaments to either lash at or entangle foes up to a short range. Overall, however they will try to use the unique environment the Swarmstar provides to their advantage. They cut the filaments their foes hang from, knock them off ledges, or even grab them and drop them, often swooping down to grab them again later. They can knock weapons from their hands (most likely to be lost forever). When attacking humans inflicting pain and terror is just as important as bringing down prey to feed.

If a navarac is reduced to less than 6 points of health, it will usually attempt to fly away. If one or two fly away, then a whole group will probably follow - but only to come back again and again with their harassing tactics to eventually wear their enemies down.

Navaracs don't speak or even have human-level intelligence, but they're more intelligent than what many would suspect. A nonhuman might be able to have a very simplistic, non-linguistic interaction with a navarac, but the creatures hate humans too much to do anything but kill them.

A small pack of navaracs has set up a number of traps - loose filaments, loop snares, sharp sticks hidden amid said filaments, etc. - around a hanging city to catch or kill those who come and go.

Navaracs are known to rest inside filament tangles. Within a nest, an explorer might find man-made objects of value (including a cypher or two) that were kept as trophies.[2]