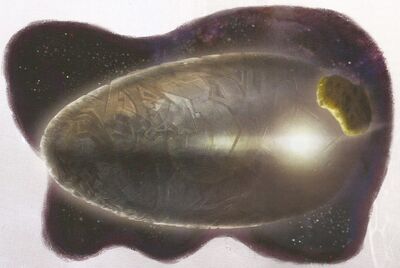 Nachant is a massive, silvery, egg-shaped structure that gently floats throughout the Phaeton Halo. It is the home of the pyths.

Measuring at about 6 km. in diameter, there's only one known way of entering into Nachant, and that's through a 10 ft. wide cavity that's lit up so bright that it's like staring directly at the sun. An otolin named Heurist has inferred that the light it emits is simply some kind of defense mechanism to prevent people from entering. Unfortunately, as a result of these powerful rays, anything that passes through it will melt after only a few seconds. Some otolins, besides Heurist herself, may hope to gain entry, some are drawn to its mentioning in their prophecies, and others try siphoning this energy in order to power their various devices.[1]

Heurist is an ancient, scarred otolin who has permanently stationed her loneshell to the exterior of Nachant. She claims the structure for herself and spends much of her time analyzing its only means of entering. She may invite visitors for chit chat, which would take place within her large shell, and offer them some refreshments. She'll berate visitors with questions regarding their intentions and origins, especially if they aren't otolins themselves. If the latter is definitely the case, Heurist might even ask that these people do something for in exchange for entering into Nachant. These tasks she provides can be as easy as delivering a message to other otolins but could also be as tough as facing down a nearby wharn. Of course, she still can refuse those that come to recharge their devices, like others of her kind, and even those who hold items to dangerous to even deal with. Anyone who disrepects her claim to Nachant will have to deal with a small pack of grendlim she stashed on the small asteroid orbiting the structure.

According to Heurist, a handful of creatures have entered Nachant before without succumbing to its effects. She claims that this is due to the structure's inhabitants allowing them passage, though she doesn't really know for sure. Regardless, those that have entered the structure have never returned.[2]

It's unfortunately very difficult to enter Nachant itself, and the best way in is with the aid of a Nachant Key, a kind of artifact scattered around Phaeton that allows creatures through without activating its illumination pulse. Without it, however, explorers will need to study, or have access to, the records of someone who successfully did enter it, alongside a series of difficulty 8 Intellect tasks. Teleportation inside will not end well for explorers, and any mistake in an their calculations could easily mean their demise.[3]

Nachant's interior is revealed to be a large and hollow space, filled with breathable air, low gravity, and an unending source of hard white light-based illumination. The space also contains a perfectly-preserved city of unimaginably high skyscrapers, each made from synth. It appears to have been abandoned for who knows how long. Even weirder is the strange perception of the interior stretching further beyond what was thought possible as visitors progress along the flat, empty flooring of the area, possibly suggesting either an illusion or spatial distortion allowing for a much larger interior than exterior. It also becomes incredibly difficult to find the entrance to Nachant again, if any visitor were to lose direct sight of it, as a result of the interior's constant shuffling, expanding and retracting throughout time and space. This is the main reason as to why nobody has ever left Nachant. The long structures within Nachant are impenetrable, thought every block from one, another is explorable, filled with dark interiors that can only be traversed via simple, vertical passages. Some of them contain devices, though never of the same origin, but all varying greatly in size.

The creatures which naturally inhabit the interior of Nachant are the orolins and the pyths. Orolins are devolved forms of the otolins and serve as beetle-brown vermin about half the size of their similarly-shaped counterparts and who've built nests all throughout. They can be usually drawn to the activities of any outsiders, especially if they include otolins. Due to the orolins' nature, the latter actually find them to be spiritually terrifying and physically dangerous. The Pyths are up to a hundred entities who've each claimed a section of the interior for their own. In a type of game-like logic only they can understand, each pyth tries to take control of the other's territory. These games, much like their environment , seem to surpass the observable reality that humans know of. They humans and any visitors, such as humans, as vermin but may sometimes use one in an attempt to gain a brief advantage over another one of their kind.[4]

On occasion, traces of memory from a Nachant Key can enter the mind of its owner, thus allowing them to pose only one question to the datasphere for an answer. [5]

In truth, those that didn't make it back never were able to make it back out, and the explorers might come across the remains of the failed human explorers.[6]