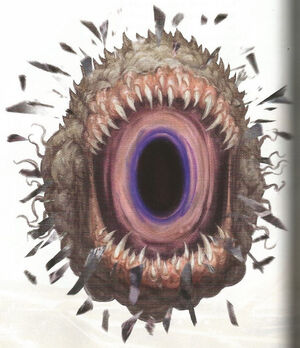 Muttering mouths are intelligent transdimensional gates. A 5-foot diameter central blot of spherical darkness - the mouth - is surrounded by a halo of whirling metal debris - the teeth. A mind exists as a telepathic overlay that survives on the outer "skin" of the mouth, visible as a purplish aura. Even when it's not directly communicating, nearby creatures "hear" a telepathic muttering within short range.

An insatiable mouth can pull itself "inside out" to travel to any dimension it knows about, or into any adjacent dimension.

Speed defense as level 3 due to size; transdimensional knowledge as level 7.

A muttering mouth isn't automatically hostile. But the mind impressed upon the gate is slightly mad, and despite being telepathic, the creature is easily confused and angered. However, it still will negotiate, and may even offer to send the PCs to another dimension.

PCs stranded inside another dimension use a cypher to summon a gate portal. A muttering mouth appears.