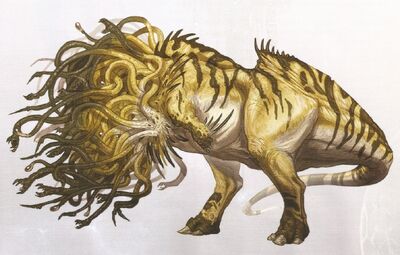 Mujidavar are grotesque beasts native to the Fields of Dore on the Gloaming.

Mujidavar are bipedal, scaly monstrosities with long tails. Where normally a head would reside, instead a mujidavar possess a squirming mass of tendrils and tiny maws. Some of the tendrils end in bony blades, while others in bulbous eyes, and a few more in even more tiny mouths.[1]

The Fields of Dore on the Gloaming

Both Stealth and Speed defense as level 4.

A mujidavar can use an action to move a short distance and then proceed to attack with either its tendrils or a subsonic screech. Despite having a large quantity of tendrils, the creature can only use them to attack a single foe at a time.

The focused screech of a mujidavar operates at a subsonic level, which can thus scramble the sense of a single victim within short range. If the target fails an intellect defense roll, it believes that everything it sees or hears isn't precisely where it actually is. As a result, the difficulty for any attacks, tasks involving targeting of the creature and its current position, Speed defense rolls, and even movements is increased by three steps.

Mujidavar are basically animals - belligerent, predatory animals at that.

A pair of mujidavar is terrorizing a small isolated community, and the PCs traveling by are the villager's only hope. As a reward, they'll offer the characters the location of a recent eruption of Archadian motes.[2]