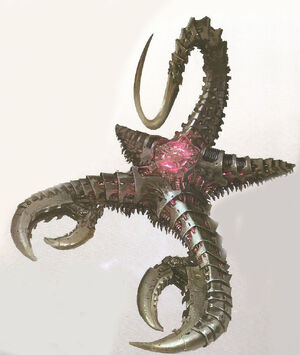 Mozck Automatons are machines possessed and mutated by the entity known as Mozck.

Any time an instantiation of Mozck infiltrates and successfully overwrites a machine, the resulting entity ends up with many similar traits, despite the initial differences in both the shape and conformation between hacked machines. Likewise, a Mozck automaton's shape alters over time so that it will resemble a nightmare machine version of a scorpion, a starfish, or something else that doesn't normally come into the light.[1]

Tasks related to understanding and manipulating the numenera as level 10; detecting falsehoods as level 7.

A Mozck automaton makes physical attacks with either a bladed wing, pincer, tentacle tip, or some other implement related to its form. However, a mature Mozck automaton (one that's fully transformed, which can take a few days) usually relies on psychic attacks that disrupt the thought processes of organic and machine intelligences. A target within long range must make an Intellect defense roll; on a failure, it takes 5 points of Intellect damage, and the difficulty of its actions is increased by one step while it remains within long range of the Mozck automaton.

A target that's defeated by a Mozck automaton might be killed, though some are known to survive. Those that do, however, are infected with a nanoscopic parasite that slowly begins to change their flesh in random and usually horrible ways.

Most Mozck automatons will regain their health at a rate of one point per hour, when when they're at zero health. The only way to eliminate this ability is to destroy the automaton entirely.

If a Mozck automaton communicates at all, it usually will do so through broken psychic images that tend to make humans nauseous and rarely offer any real chance of negotiation.

These compromised machines can be found in many ruined installations floating throughout the void.

An inactive (but slowly regenerating) carcass of a defeated Mozck automaton can be salvaged for 2d6 shins and 1d6 cyphers.[2]

More powerful instantiations of Mozck likely exist, running the gamut all the way up to a level 10 nanoswarm creature of ever-shifting shape and abilities