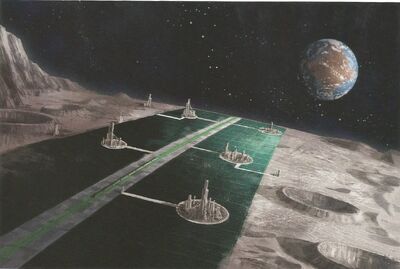 The Moon is Earth's natural satellite which is subject to time jumps.

The Moon of the Ninth World's Earth is a fickle one. On some nights, it's seen to bear a bluish green stipe across its surface, giving rise to such terms as the "moon's belt" or even the "bounded moon". The Corhay people from Western Matheunis believe that a great hero named Thullane, had used a rope made from seaweed to lasso the evil moon into submission, once upon a time.

The Moon itself is actually littered with many different complexes and small abandoned-cities, implying much use by the people of prior worlds. And while a journey to the moon is much harder to undertake than it was aeons ago, a certain gateway teleporter or vessel might be able to land explorers safely onto its surface. Unfortunately, the moon is still as completely barren, devoid of air, and seismologically dead as it's always been, so any and all travelers must come prepared with some kind of breathing apparatus, a good supply of rations, and even a means of preserving atmosphere-like pressure around their bodies. The gravity of the moon is also still 1/6th that of the Earth's, ultimately leading to a low-gravity environment. [1]

Perhaps the weirdest aspect of the Ninth World Moon is that it has the uncanny ability of sometimes traveling backwards in time, by millions of years even. As a result of its temporal transitions, everything on the surface (with the exception of Ninth Worlders, as well as anything beyond, will not be the same as visiting explorers noticed, a little prior to the change. Sometimes these changes can be as minimal as the appearance of a new crater, or the size difference of a nearby mountain, but other times, the changes can be as major as the disappearance of the moon's entire band as well as a great shift in the shape of the Earth's continents and surrounding star formations. However, if explorers are in the right location, they may stumble upon at least one of the so-called "Twelve Embassies".

The exact range of time distortion is limited to a bubble which surrounds the moon about 10 miles off it's surface. Leaving the bubble will instantly send explorers hurtling backward to their respective time period. This effect can be both physically and mentally jarring, resulting in 5 points of damage to all of their stat pools, if unable to resist a level 6 effect. Each time shift that the moon makes usually lasts for about 20 hours and can occur every 70 - 80 hours at a time, resulting in the moon of the distant past being observable to all Ninth Worlders about a quarter of the time. While no predictable pattern exists for the moon's temporal transitioning, any shifts that vary significantly in either length or frequency are quite rare. [2]

A criminal who once stole a powerful artifact from the ruler of Stirthal fled to the Moon and now hides somewhere within the South Pole fortress.

The huluraloch inside one of the empty embassies can inform explorers of the location for an ancient vehicle located near the moon's south pole that still functions and can even travel to any one of the sun's other children in less than 50 hours. If found, the coordinates to Tuleer will already be set.

Along the Luna Ring lies a spot where the transport carriages will always stop. Despite there being no station located there, no one has yet to determine why.

The dust within a few dozen acres of the mountainous region of the moon will appear blue, piled up around the barely extant ruins of some ancient city. Within this small area, the atmosphere and gravity are identical to the that of Earth's.

Somewhere within the deep shadows of the moon's mare lies a tiny flower that blooms, despite the lack of anything to sustain it. If at all picked, a tiny scream of pain can be heard, but not perhaps if the culprit happens to be wearing an envirosuit. [3]

It's believed that in the past, where the time slippage whisks explorers off to, the Earth is a mostly dead planet, bereft of all intelligent life. This would mean that it may be a period in between the fall of one world and the beginnings of another, which might be hundreds of million years into the past. [4]