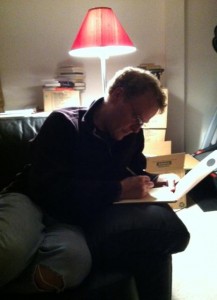 Monte Cook is the creator and lead designer of the Numenera role-playing game, and the founder of Monte Cook Games. He is also one of the writer working on the Torment: Tides of Numenera video game since the Kickstarter campaign reached more than two millions dollars, and he will write one the Torment novel.

Monte Cook attended both the prestigious Clarion West SF&F writer’s workshop and the NASA-funded Launchpad workshop. Having worked as a professional writer for more than 20 years, he wrote fiction and nonfiction novels, as well as several comic books.

His work, however, as a game designer, is likely most notable. Starting in 1988, he has written hundreds of tabletop roleplaying game books and articles and won numerous awards. After working for Iron Crown Enterprises and TSR, he started his own game design studio, Malhavoc Press, in 2001. He also works as a freelance game designer.[1]