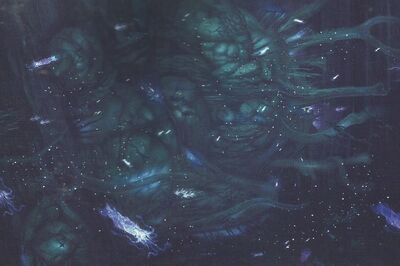 Minifera is a vast, diverse city located 40,000 ft. under the sea. It is home to the Naiadans as well as the Naiadapts.

Minifera is the result of both expansions and contractions from several Prior Worlds. Despite being so deep that no light from the surface shines through, Minifera is still filled with the bioluminescence of countless tiny, darting creatures called scintillans. The city's architecture and layout are a complex mixture of elaborate, constantly shifting domes and spikes, alongside pods and tubes which all protrude from the walls of a 2 mile wide in the ocean floor.

The majority of Minifera's population consists of creatures called naiadans, each of whom is comprised thousands of much smaller living units known as dyremmi. Humans among other races that visit or even dwell within the city usually adapt their own biology to the dyremmi, in order to better withstand the crushing pressure of Minifera's underwater depth. A small percentage of these humans will even choose to fuse with the living technology and become hybrids known as naiadapts. The dyremmi allow naiadans to exchange abilities, memories, commune, reproduce, etc.

While any means of underwater transport will probably take one to Minifera, a method known as the Invisible Corridors won't extend all the way to the city, at most ending up about 5 miles above where the locale would be. Instantaneous means of travel will transport the passenger either within the sights of Lorrother or within some observation pod constructed by the Seechar.

The crushing pressure at Minifera's, which is a thousand times higher than on land, can kill and unprepared surface dweller extremely fast. To prevent this, a way to divert the pressure must be obtained, alongside a breathing apparatus to adapt to the lack of air and some insulation to protect from the extreme cold. Those unprepared visitors have a chance of being saved by the dyremmi. While one might think their flesh is being devoured by a swarm of amoeboids, the dyremmi are willingly try to save that person's life and force-adapt them to the conditions of their home.[1]

· Zocqua: - A yellow-bulbed stalk-like plantlife that thrives in and around Minifera. One stalk can grow up to 20 ft. tall and produce tiny fruit which, in turn, produces a delicate, crystalline automatons that resemble tiny underwater insects. While these "seeds" otherwise serve as food for other creatures, one who's trained in the numenera can use these creatures to repair any device or vessel.

· Scintillans: - Mentioned above, scintillans are ubiquitous organisms that flash like little stars all throughout the upper portions of Minifera, as well as over the gaping maw of the wide trench it resides within. Up close, they resemble tiny, firefly squids.

· Noghalor: - the much larger cousins of the scintillans, these cretures hunt their smaller brethren as well as the lone naiadapt, naiadan, or other intelligent lifeform.

· Wild Dyremmi: - As numerous as the scintillans but not as tame as those mentioned above, the wild dyremmi saturate Minifera in hundreds of different populations, serving for the most part as pests. With an individual dyremmin being about 1 in. in diameter, wild dyremmi come in various shapes like stars, spines, knots, and even spheres. The Spine-shaped wild dyremmi are considered to be the most lethal of the bunch, and are known to attack in swarms. These creatures known as "Adapter Spines" will usually attack any creatures not adapted to the environment of Minifera, otherwise, they're normally placid in behavior. Those attacked, especially if human, run the chance of being force-adapted to their environment, with even the chance of becoming a full-on naiadapt. [2]

• Temple of the Trait Breeders

Meutha is a naiadapt who will sometimes visit Minifera embassies in Qi, preaching about the benefits of dyremmi interventions on humanity. Unfortunately, he's also gone far enough as to kidnap humans against their will and systematically try to create new naiadapts from the. Rumor has it that several have already died from this.

A plague of corrupt dyremmi has infected certain domes within Minifera, sickening both their naiadapt and naiadan populations. Those afflicted tend to head straight into the Implosion Zone or even disable their adapation constituent dyremmi.

The Myessach Council currently suspects the presence of spies from Persamlor within Miniferan society. While it may seem hard to believe, due to the nature of communion, the only way of finding out lies in visiting the locale.

Cedarama is a female naiadan who believes that she's opened a one-way portal through time leading back to a primordial era of Earth's existence, long before even the first of the 8 Previous Worlds had grown into dominance. In said ocean, lies primitive undersea life devoid of a billion years worth of exploitation and adaptation.

A small gravity storm has escaped the Implosion Zone and already moved beyond the Trench Midzone. It acts as though it has somehow gained a limited intelligence and now "hides" within an abandoned Minifera Dome. It can be discerned as a distortion through the water.

On occasion, whenever 2 or more naiadans have finished communication with one another, they'll discover a few rogue dyremmi constituents that hold the fragments of some unknown message within. Due to its incomplete nature, the purpose of the message and whoever's sending it remains a mystery.[3]

The naiadans of Minifera hold embassies within various oceia as well as on a few dry-land locales, such as Qi, Ledon, Mulen, and even Rarrow. The latter are usually staffed by those naiadans who maintain a much more human guise.[4]

If a phase modulator's crystal plates are ever worn down by those of a gravity modulator, the user will gain an extra point of armor. The combined plates also won't hinder movement or even fatigue the wearer in any way whatsoever.[5]