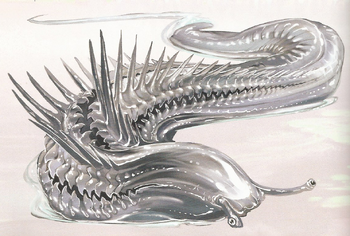 Mimetans are shape-shifting slugs that roam the Ninth World.

These foot long slugs are composed of translucent goo and have hardened and dangerous-looking ridges running along their edges. They can form mouths filled with ridge-like teeth, and mimetic horror. They're accidents of ancient technology, birthed from a material component known as mimetic gel that mimicked a living creature. Now they "live" to eat and replicate themselves. However, they can take on the appearance of objects or creatures that aren't already present, which means that sometimes mimetans can be detected by the mere fact that there are two of something where earlier there was just one. But which of these would be the real mimetan?[1]

Climbs as level 5. Disguise tasks as level 7. Speed defense as level 4 due to size.

A mimetan prefers to act with the art of surprise, taking on its true form to bite target that wasn't previously aware that the tool with which they were holding is a hungry, shape-shifting worm. Each time that a mimetan successfully inflicts a full 3 points of damage, it replicates itself using the stolen flesh at the beginning of its next turn. Now two mimetans can attack, each one duplicating itself again and again in the same way.

Where four of these creatures attack as one, treat them as a singe level 4 creature that inflicts 6 points of damage. Successful group attacks that do the full points of damage also produce two additional mimetans.

A group of ten or more mimetans may attempt to immobilize a victim. If the victim can be held immobile for two consecutive rounds, the group of mimetans may duplicate the victim in guise, in bearing, and to a very limited extent, in mind.

Mimetans can't communicate unless ten or more have taken on the guise of a creature that can communicate. Even then, the faux creature is confused, partly inarticulate, and likely to reveal its true nature soon enough, collapsing into a swarm of mimetans.

The characters find the lone survivor of some kind of attack. The survivor is wounded, confused, and partly inarticulate. They can't seem to describe what happened, but they ask for shelter and food.[2]

Unprincipled merchants have utilized mimetans to multiply their stock. Customers who purchase a cheap meal, a coil of rope, or some other needful thin might later discover a posing mimetan waiting for a chance to strike.[3]