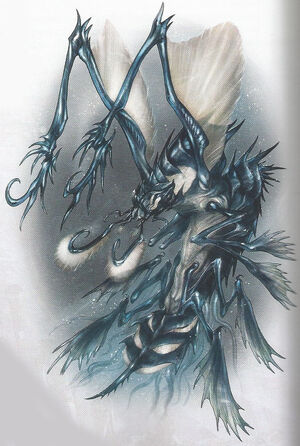 Mercurial Wasps are underwater insectoid creatures that live in swarms.

Aggressive. Angry, Voracious. Deadly These are words you might use to describe a swarm of mercurial wasps, if their venom wasn't already closing your throat and paralyzing your vocal cords.

Looking much like their name-dwelling namesakes, these undersea wasps swarm through the water in groups of up to a dozen creatures at a time. While these blue-and-black striped creatures might be small - only about 1 foot long - they're deadly. They appear to constantly shift between solid metal and liquid metal states, making them difficult to see, much less strike.

Mercurial wasps eat metal and build their hives by chewing complex tunnels and rooms deep inside structures. A hive can house as many as three dozen wasps.

Hidden and protected deep inside each hive is the Court, a group of three slightly larger wasps that are more clearly solid metal constructs. Unlike other mercurial wasps, members of the Court have large, glowing orange eyes and no visible stingers. The're able to communicate and might attempt to beg for mercy. They flee the hive rather than fight, should it come to that.

A swarm of a dozen mercurial wasps is a challenge for even powerful PCs. The GM can have a group of eight to twelve wasps attack en masse as a single creature that is two levels higher, inflicting double the original creature's normal damage.[1]

Defend as level 4 due to shifting states.

A character struck by a mercurial wasp's sting must make a Might defense roll or be paralyzed, unable to move, for one round. A swarm of five mercurial wasps work together to attack with stunning speed and coordination. They do so as a level 5 creature, inflicting 8 points of damage, and the paralytic effect lasts for two rounds.

Due to the wasps' proclivity for metal, they may attempt to build a hive in the PC's vessel, or perhaps they've already established one among some metal ruins that the characters are exploring.

Members of the Court may attempt to cajole or reason with the PCs if they feel threatened.

A wasp's venom sac holds enough poison for three uses. The barb can be used as the blade of a shiv or other light weapon[2]