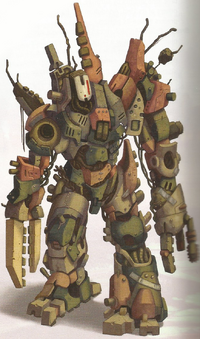 Mech Shamblers are living constructs in the Ninth World that fuse themselves with technology.

Mech shamblers are machines that have become unmoored and begun to wander. As they wander around, they scavenge other machines and devices they come across, sometimes integrating that material into themselves at random, other times they install parts of themselves back into the machines they find. Change appears to be the primary motivation for this continual movement and rearrangement, though some wright believe that a deeper imperative is at play and that mech shamblers are actually attempting to complete some ancient, half-forgotten program or ritual.

Following in the wake of a mech shambler's rearrangements sometimes increases the odds of salvaging iotum or finding plan seeds, so despite the danger associated with getting in a shambler's way, numenera scholars are always glad to hear of such activity.[1]

Anywhere other machines can be found

Speed defense as level 4 due to size. Tasks related to salvaging, repairing, and understanding numenera as level 8.

Most mech shamblers can emit multiple energy rays (usually three) at different targets they can see within long range. Depending on the shambler in question, any other offensive and defensive devices might be available, including devices that can alter the local gravity, either slow or speed up time, take control of nearby devices or machines, or even allow the mech shambler to instantly transfer itself (or foes) to some other location.

If a mech shambler is within immediate range of other machines, it can regain health at a rate of 4 points per round even as it takes other actions.

Mech shamblers aren't interested in communicating, though they'll be favorably responsive towards those who will provide them with more mech to swap components with. They may even leave a unit or two of iotum behind to repay the favor.

Something strange has happened to an installation the community depends upon, and it's no longer functioning. It also looks like about half its insides have been swapped out with random machine parts. Large, shambling prints lead away from the malfunctioning installation.

A defeated mech shambler can be salvaged for a few cyphers, 2d20 shins, and a couple of rolls on the Iotum Result Table.[2]

No two mech shamblers look the same, but they're roughly about 15 ft. in diameter, move on multiple legs, and have a jumbled, somewhat confused surface composed of partial devices.[3]