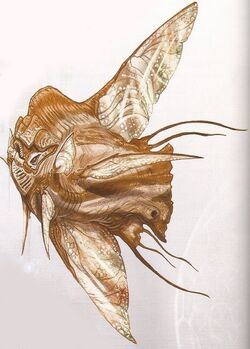 The their brown-hued hides, diaphanous wings, and a penchant for gliding for long minutes, it's hard for prey to distinguish the predators known as malorks from the cloud banks and thunderheads that serve as their hunting ground far above the surface of the storm-swaddled planet, Urvanas. That is, until a malork gives its supersonic screech, a noise so terribel that it can split atoms and rend flesh.[1]

Either alone or in groups of 2-3. Some malorks are even used as combat mounts by cloud city raiders

Speed defense as level 3 due to size; tasks related to flying maneuvers and stealth while gliding near the cloud layer as level 5.

A malork tries to incapacitate its prey from a distance with a long-range sonic blast that can target either a single creature for 5 points of damage, or all creatures within immediate range of a chosen spot for 3 points of damage instead. Creatures that take damage from said sonic screech must also make a secondary Might defense roll or be stunned for one round and unable to take actions. For flying creatures, this usually means loss of flight.

Up close, a malork's bite is almost as dangerous as its hunting cry.

A malork is adept at diving since it must often catch falling prey on the wing, but more important, it's skilled at pulling out of dives, even after entering the cloud layer. When a malork dives into a cloud, it usually emerges again in a place where their prey will least expects it. The first time a malork surprises prey with this tactic, it gains an asset on its next attack on that target.

Malorks are valued as mounts, but only after they've been broken and trained. Otherwise, they react like predators interested in eating and defending themselves.

A malork nest of unusual size infests a wild cloud city that always seems to turn up near populated cities. Either the nest needs to be burned out, or the wild city needs to be dropped.

Malork wing segments are crystalline in nature and sell for up to 20 shins per pane inside a populated cloud city.[2]

Given how Urvanas wildlife seem simultaneously alien yet familiar to the human eye, it's probable that they really aren't natives, but rather the result of past efforts at atmospheric engineering.[3]