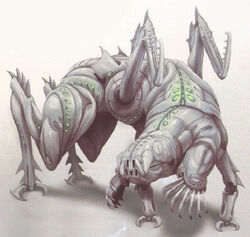 Machine Eaters are ravenous beasts native to the Phaeton Halo. They hunger for automatons and other machine-related life.

Machine eaters burrow vast subterranean tunnel complexes within solid structures tumbling through the Phaeton Halo. When they're encountered inside empty space, it's usually because one's in the process of traveling from one spinning Halo component to another, or because the machine eater happened to sense a particularly strong numenera signature.

To the otolins and other forms of machine life, machine eaters are nothing but vicious and pernicious predators, to creatures of living flesh, machine eaters aren't usually lethal, though they will pursue any character who carries enough devices of the prior worlds. Machine eaters want to extract the power that many machines rely on to operate.

Hungers for devices of the numenera and automaton vital energy

Anywhere within the Phaeton Halo

Perception as level 8 for detecting automatons, machine life creatures, and any creatures bearing cyphers and artifacts

A machine eater clamps its sticky pedipalps onto its target, inflicting 4 points of damage. Against automatons and biomechanical creatures, that damage will ignore Armor.

Instead of dealing damage, the machine eater can instead choose to drain an oddity, an artifact, or a cypher carried by the target. when this occurs, the item becomes useless, and the machine eater regains a number of points of health equal to the level of the drained object.

A machine eater can also attempt to stun any automatons an biomechanical lifeforms within short range by generating a pulse of energy. The affected targets will lose their next round of action, and artifacts and cyphers can't be used for one round.

Machine eaters aren't at all sapient creatures; they're much more equivalent to burrowing vermin on Earth, though with a more predatory bent.

A meteorite struck a city in the Ninth World. Unfortunately, it was riddled with tunnels and contained a nest of machine eaters. Now the surviving creatures are moving out into the city and causing havoc by eating every tech device they come across.

1d6 cyphers (each one higher than normal, up to a maximum of level 10) can be salvaged from a machine eater's deactivated body.[2]

The otolins believe that machine eaters enjoy a communal life inside their colonies. Studies are ongoing - if a tainted power source could be introduced to the colony, it would likely wipe out an entire nest and render that region of the Halo safe.[3]