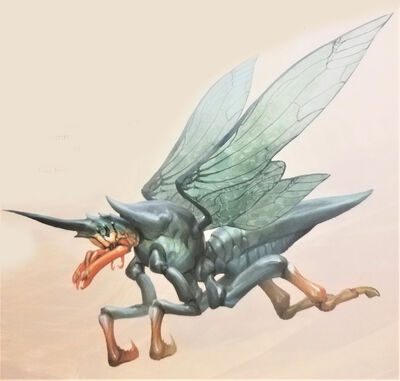 A Lycidaris is a type of insectoid, ultraterrestrial creature.

Lycidarises come in many varieties. Most have long, transparent wings, an 8 ft. long beetle-like but sleek body, razor sharp mandibles, and a massive horn-like barb protruding from the crowns of their heads. The ultimate parasite, lycidarises are a variety of planar locust that infest and eventually completely consume a world. Afterword, a select few creatures pass across a dimensional barrier weakened by their overwhelming presence into a parallel plane, starting the process anew. An infested region in a new dimension is obvious from the pale, stringy, gauze-like nests, smothering the natural environment under layers of webbing. Infested regions usually grow at an ever-accelerating rate.[1]

Flies a short distance each round

A lycidaris spins level 5 webs that, when spun as a trap, require an intellect-based perception task to avoid. A victim caught in a web must make a Might defense roll to get free. After three failed attempts to get free. a victim becomes so wrapped in the webs that they're pulled into a pocket dimension, and there remain stranded until freed.

A lycidaris's horn allows it to navigate into alternate dimensions, but to do so, it must spend at least ten minutes preparing before it burrows into the fabric of reality. After it makes the passage, it will fall unconscious for several hours. A lycidaris-made hole between universe usually remains open for one hour.

Lycidarises are, for the most part, drones, though the level 9 overlord of each community is intelligent and telepathic, and can communicate as a drone never would.

A strange web that captures herd animals and even a few villagers appeared on the edge of town a few weeks ago. Things that remain caught in the web for too long disappear, never to be seen again.[2]

Some dimension walkers have been known to try and capture lycidarises and use them for traveling between planes.[3]