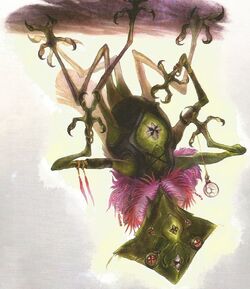 Lux are a vaguely-humanoid, intelligent race of creatures native to the Planet Urvanas.

Lux only slightly resemble humanoid lifeforms; they're designed for clambering across, crawling on, and adhering to surfaces, not standing or walking on them, particularly a level one. Thus, their segmented, asymmetrical limbs (seven total) are instead arranged "above" their torsos, while their heads "hang" beneath them. However, a lux that clambers up onto a level surface inside a cloud city's dome easily will reverse its orientation, so that its legs will move beneath in such a manner similar to that of an animal from Earth. Lux skin is both smooth and green - the same color as the moon they call Aato - and slightly translucent, but lux are made of flesh, not a diamond-hard synth.

Lux can breathe air within inflated air domes where the humans live, but they prefer the air outside. That's why they often inhabit the structures and levels that hand beneath each and every cloud city, rather than the structures contained within the domes on top, as humans do. Larger cloud cities include hanging gardens, sacred areas, and even individual spaces for lux loners and families. A human being can get around the hanging "upside-down" lux structures on the underside of a cloud city, though doing so is dangerous, and a misstep initiates the Dive (lux are built to hang and thus din't face the same challenges). Humans who find it necessary to interact with the lux on their home turf need a breath recycler and, if they can get a pair of gravity boots.[1]

Most lux continue to live as their ancestors once did before humanity arrived and began colonizing the wild cloud cities. They exist in fairly static hunter-gatherer groupings called "srays" as they have time out of the mind. Home of the srays cooperate with each other, though a few outliers survive by raiding the bounties of others. Lux are known to wear colorful braids and beads among other colorful ornamentation, which differentiate lux of one sray to the other. Despite their hunter-gatherer lifestyle, lux aren't primitive creatures. They can and do use ancient devices they find and are able to activate , using the items to improve their lives in a variety of ways. The most clear example being a reliance on the windriders. Lux heavily customize and decorate their windriders, and hang beneath them rather than stand on to like humans do.

Lux oral histories describe their origins in a variety of ways that often conflict with one another, though almost every such legend includes Aato as the creator god, as the mother of the lux race and thus the eldest, or as a vengeful father that sent the lux away for some imagined crime. Many lux see the physical moon itself as not only a manifestation of their deity, but possibly also as a place where there spirits will go after their bodies have long been discarded in Zhoh.

Individually, lux are as variable as humans are, except for one trait. Even lux who have fully embraced human ways and even live among them with absolutely no connection whatsoever to their original sray (as some lux have done for generations) remain beings that are given to a deep contemplation of their surroundings. Almost to a one, lux revere their life on Urvanas, even if they hunt it for food, and acknowledge the presence of the Aato in all things. Various rituals, usually based on a particular position of Aato as it orbits Urvanas, celebrates this fact. Many lux claim that Aato communicates with them, though they'll never seem to recall the conversation afterward. They say the glory of the experience overwhelmed them.

Lux speak their own language, and many also speak the dialect of the Truth that the humans speak.

Lux warriors and hunters alike ride windriders provided by their home cloud city or stolen from the lux of some rival city. Unlike some human raiders, no lux would consider using a malork as a mount. They consider riding the living creatures to be disrespectful, and in fact the lux make a point of filling any malork-mounted raiders they encounter in an effort to liberate them. A few lux rely on technology, such as static force guns, to conduct raids and defend their homes, but most prefer mighty bows that have extremely long range.[2]