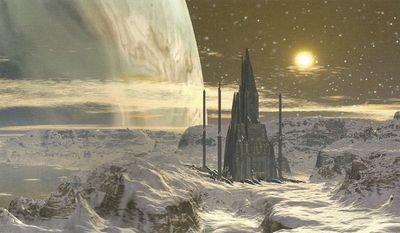 Kristeza is a desolate World linked to the Ninth World.

Kristeza is a cold moon orbiting a giant planet of swirling storms. The gravity here is low and the air is breathable for humans, although it's as cold as the highest mountaintop in winter.

Kristeza is a desolate, lifeless place, yet next to the shores of a frozen sea, a black and grey temple rises. This temple is dedicated to Ahrigalos, known as one of the so-called Lords of Rust and Ash. Most of the time, the temple is abandoned. Its walls and pillars, as one might imagine, slowly decay. But in that decay, the temple grows more potent. At least, that's what the devoted of Ahrigalos believe.

Worshippers of Ahrigalos from the Ninth World travel to Kristeza and the dark temple once each year using a powerful interstellar teleporter located somewhere in the Black Riage. These pilgrims are usually a mix of humans and intelligent automatons, along with a few humans who have bonded with mechanical parts. They revere decay as the representation of time marching inexorably toward the utter end of the universe, which to them is holy.

They're also anarchists who value life only as a way to observe the degradation of existence. It's because of this that, paradoxically for people who revere the end, the priests and devotees of Ahrigalos seek ways to prolong their lifespans. They want to come as close as possible to observing the ultimate death of the universe. They spend their time in the Ninth World attempting to find or create the means of long life or even immortality. On Kristeza, however, they meet to worship their cold god of decay.

Should they ever discover an ancient device or means of extending life, they would likely store it here in their secret, sacred place, protected by automaton guardians.[1]