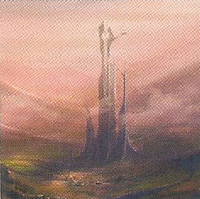 The stench of cattle flesh and cattle dung greets you long before you enter the tall stone wall that surrounds Kordech. As a traveler, you'd probably prefer to pass the city by, but the 7,000-person town is the last refuge for leagues on a road through a dangerous wilderness called the Dark Hills.

Kordech is filled with sales pens, breeding pens, and slaughterhouses for shiul - massive creatures with four wide horns and valuable meat. The cattle see their beginning and end in Kordech, but in between they spend their lives grazing in tended herds in the surrounding lands (where they're preyed upon by broken hounds and other predators, as well as bandits). Within a to mile radius around the city, no fewer than twenty-six defensible wooden palisades have been erected near or around small villages to protect the shiul herds at night.

These dangers also explain why the city possess such a high, well-constructed wall that girds mostly crude wooden buildings, animal pens and corrals, and structures cobbled of found sheets of synth or metal, all connected by muddy, dung-filled streets.

The Tower of the Aulifex[edit | edit source]

At the center of this dirty, ramshackle town rises a mysterious structure. A soaring metal walkway curves up toward the glowing entrance to what appears to be a metal tower hundreds of feet high. Strange wing-like crests are positioned asymmetrically along the exterior. This is the Tower of the Aulifex.

The Aulifex is the ruler of Kordech. He claims no other name and refers to himself as the sorcerer. In truth, the tower is an artifact from prior worlds, and the Aulifex has mastered enough of its secrets that he commands a great many powers, including healing grievous wounds, lashing out at enemies with fire, even observing faraway locales.[1]