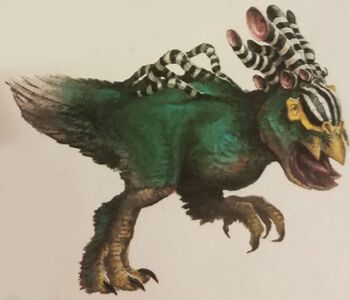 Kateraptises are strange, avian beasts that cause other creatures in the Ninth World to asexually reproduce.

These avian predators are reviled by virtually everyone. Many people think them hell-spawned demons rather than beasts. Brightly plumed, they stand almost 12 ft. high, and although they don't fly, they leap about with surprising speed and agility. Kateraptises sport a crownlike mass of fleshy protuberances upon their craniums.

Kateraptises generally live and hunt alone, mating only once to produce a clutch of three or four eggs. They conceal their nests in high caves or other spots that are difficult to reach without a mighty leap. Their terrible, shrill cries send other creatures in their habitats running.

Legends refer to these creatures as "mother-makers" due to their bizarre power and attribute the existence of all manner of odd and horrific creatures to them. this, however, likely stems from a misunderstanding of what a kateraptis actually does.[1]

Jumping as level 8; perception as level 5.

The katerpatis will attack by leaping to a position near its prey. In the following round, the protuberances on its head emit a mixture of chemicals and radiation that has a unique effect on creatures that range from the size of a human child to something the size of a kateraptis (although they are immune). All such creatures within immediate range that fail a Might defense roll collapse in pain, unable to act. In the next round, the cells within the victim's body replicate at an astonishing rate, and he still can't act as his flesh grows and twists into a new shape. In the third round, the growth will separate from the victim, and the victim moves one step down the damage track. the naked, hairless growth, flopping and writhing along the ground, has the vague appearance of the victim, though covered in bloody goo. In effect, the kateraptis forces its victims to asexually reproduce.

The kateraptis then attempts to eat the mindless, helpless spawn. However, if the original victim fails an intellect defense roll, they can't help but feel a kinship to the spawn and fights to defend it. But this is rather futile, as the spawn will die within a few minutes even if saved from the kateraptis.

The kateraptis will attack and eat anything with its wide beak and powerful talons, but it greatly prefers to feed upon the spawn it induces.

Kateraptises possess the intelligence of a typical predatory animal.

A kateraptis encounter is potentially one that'll never be forgotten, disturbing and terrifying all at once.

The protuberances of a kateraptis can be used to create a cypher or two by someone knowledgeable in the numenera (particularly biotechnology).[2]

It's possible that by using powerful numenera devices, a victim's spawn could be kept alive. In such a case, it's also possible that it would become an initially mindless clone of the victim after 2-3 months.