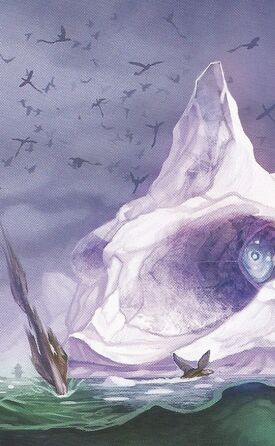 Karestrels are avian creatures that reside around cold regions of the sea.

Karestrels are aggressive seabirds with a wide range and a fearlessness that make sthe especially dangerous. That, plus their 20 ft. wingspans, vicious beaks, slashing talons, and ability to hunt equally well on land, in the air, and underwater.

Omnnivores who nest in flocks that migrate between islands and icedrifts, karestrels spend most of their time overflying wave-tossed waters looking for prey. When they sense something, they flash downward into the chop with nary a splash, then emerge from the water seconds or minutes later with their prey grasped in cruel talons.[1]

Any cold climate in flocks of 5-10

Long; long when flying or swimming

Karestrels prefer to dive from the sky when they attack, and they usually gain surprise when flashing through the airand into the water to nab swimming prey. Attacks against surprised prey are modified by two steps in the attacker's favor.

Their colorful wings provide more than physical armor and protection from cold (to which they are immune); karestrel plumage also bounces a blast of force, concentrated light, or a focused heat ray back in the direction it came from . Other kinds of energy aren't redirected and affect the karestrel normally.

Some karestrels, when not in the water, can emit a discombobulating hunting scream as part of their attack. The target must succeed on an intellect defense roll or the difficulty of its Speed defense roll against the paired attack is increased by one step.

Karestrels have animal-level intelligence. They are vicious, yet estathin and other peoples who live near their nests still attempt to hunt them for ceremonial purposes, to show their strength, or because they believe that karestrel feathers have special properties. Some estathin have learned how to rear and train karestrels, though even a trained one is liable to snap at its master. Commanding a trained karestrel is difficult ( a level 6 task) but not impossible. A child or small person might even use a trained karestrel as a mount for a short time.

A fishing boat drifts back to harbor under its own steam. The only bits of the crew that remain are bloodstains. In addition , the boat is scored as if my large talons, and many colorful feathers are found all over the ship, even with the forced-open inner crew compartments.