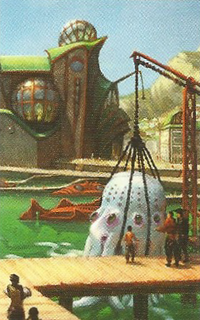 Kaparin is a seaside city in the kingdom of Ancuan.

A coastal city on the southern shore of the Steadfast, Kaparin boasts roughly 15,000 people but actually consists of less than half that at any given time. It's the unofficial home of the Redfleets, a crew of vagabonds, thieves, scientists, and other miscreants who sail the high and low seas in search of natural treasure. For the most part, they show public disdain for any numenera they find, but they aren't above selling it to the highest bidder.

By all accounts, Kaparin is a typical coastal town, filled with wood and stone structures, cobbled streets, and a series of connected docks for seafaring vessels. However, the city features one unique building along its wharf: a large stone complex called the RFM, which is a maritime museum, hall of fame, and library all rolled into one. Here, the Redfleets catalogue their accomplishments and store their findings. A visitor can view the preserved skull of a rare flutterfish or listen to an audio recording from the depths of the ocean. And you'll likely find at least half a dozen Redfleets, past and present, just waiting to be asked about their contribution. If you read the signs posted literally outside and inside the RFM, you'll discover that the objects on display are famed the world over and coveted by many. (Just don't be surprised if neither you nor anyone you've ever known has heard of them.)

Due to such a large percentage of its inhabitants belonging to the Redfleets and taking extended ocean voyages, Kaparin's homes stand empty for long stretches of time. Merchants and craftspeople specialize in water and seagoing wares, including ship and submergine repair and upkeep, breathing apparatus, food stores, and long-distance trade routes to sell the treasure that comes in from the Redfleets' explorations.

The ruler of Kaparin is Sallian Orsay the Red, one of the original Redfleet founders. A tall, willowy woman with dark red hair, she appears to be about twenty years old - and has appeared to be that age for as long as anyone can remember. The rumor is that she found something buried beneath the ocean floor on one of her submergine missions that's allowed her to live forever, or at least stop the aging process. Although some of her colleagues are angry that she didn't share her discovery with the rest of the fleet, most feel that she's a good ruler, if a little cold and reclusive at times. Sallian has a seemingly unlimited supply of goons that will die to protect her. If called on to fight, she wields a long sword made of honed whale bone.

Retired Redfleet Camptain Jamson "The Liar" Connel is often seen about town these days since he no longer commands a submergine crew and doesn't go asea. He say he retired years back, but others in Kaparin murmur that being dishonorably discharged from an already dishonorable fleet is hardly retiring. Town gossip says that during one particularly dangerous mission to the Fengali Forest, Connell killed and ate his entire crew. He goes berserk when physically and verbally threatened, attempting to strangle and eat his opponent (often at the same time).

Kaparin's street rats are the teenagers and young children born on ships at sea and then left behind. They live in small groups beneath the docks and often create graffiti on the sides of docked submergines, searching for (or cursing out) their parents. Most of them are willing to help with information, tasks, or directions for the right price or even a bit of kindness. The Ramsi sisters, Jordica and Zanca, lead and protect this ragtag group. Both deny the rumor that they're Sallian Orsay's bastard daughters. If you're approached by the two girls, they might seem well informed and suspiciously willing to help, but they'll probably do their best to ensure that you get what you want - at the price of a favor, of course.[1]