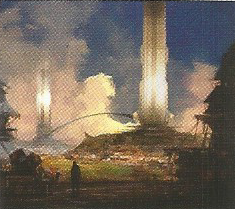 Jargolamis and Luigolamis are two cities within the Pytharon Empire that lie in close proximity to each other.

The so-called Twinned Cities of Jargolamis and Luigolamis were once so interconnected that they were considered a single entity. With a combined population of 60,000 people, the Twins have long been seen as a safe place to live, with easy access to goods and services.

The Twins punctuated by matching mirrored towers, each of which reflects the other city. Walk into Jargolamis, make your way to the Jargo Tower, and you'll discover that in every pane of glass, the bustling city of Luigolamis is reflected back at you. Stand before the Luigo Tower in the other city, and watch the intricacies of Jargolamis happening before your eyes. At the top of each tower is a creature sculpted in an off-white material that casts an eerie glow in the nighttime. The Jargo Tower has a terror bird, while the Luigo Tower has a slicer beetle.

The two cities are connected by a large, elevated skyway tube almost 2 miles long called the Umbil. Created from a combination of stronglass, ivy tangles, and various metals, the Umbil runs between the two towers. Once, it provided safe passage between the cities, with a motorized walkway and jarlers - abhuman slaves that pulled long carts full of people and supplies. Small markets and eateries sprang up along the way, and the Umbil became on of the most well-traveled routes in the Steadfast.

When the motorized walkway stopped working one day, the rulers of Jargolamis and Luigolamis - siblings Margo the Wember and Paras Gulosi, respectively - announced that they would have it up and running again in a matter of days. But the siblings fought over the best way to solve the problem, as they often did, and the walkway remained broken. Temporary fixes were put into place by those who had the power and knowledge to do so, but nothing ever lasted. As the years stretched on and the walkway wasn't fixed, the Umbil fell into disrepair and disuse.

Now the tube has become a place for dark dwellers, thieves, and worse. Although the Umbil remains the shortest passage between the Twins, it's also the route most likely to get you killed. The abhuman slaves have regained their freedom, the markets sell far darker wares than the foodstuffs of old, and dangerous creatures skulk around every bend. Trade and travel between the two cities have become sparse and strained, as has the relationship between the sibling rulers.

Still, new light dawns - a constructor named Limech recently moved into Jargolamis. He, along with a small passel of mechanized creatures, is building a second connection between the Twins, an open-air skyway that runs below the Umbil. Only about a quarter of it has been completed thus far.[1]

Recently, the leaders of the Twins issued a statement saying they're looking for any mercenaries willing to help clean out the Umbil. Pay can come in the form of shins, oddities, or even property in one of the cities.[2]