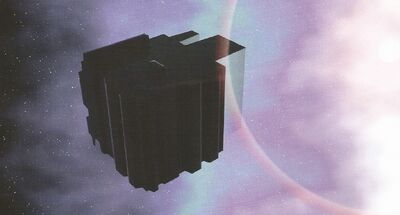 The Ishallen is a large, mysterious structure located near the planet Nullen.

Floating in a lonely corner of the void , circling a cold, childless star, the Ishallen is an artificial structure many miles across. As such, it is an excellent place to scavenge for numenera. However, it's well maintained by the two machine intelligences that control it. These intelligences, which call themselves the Yellow God and the Blue God, have no material bodies. Rather, they inhabit the very workings of the structure. However, each has a great deal of power to shape reality in the Ishallen, thanks to a host of nano-spirits that swarm within it. Not unlike two incredibly powerful nanos, the Yellow God and the Blue God can reshape matter and energy, create objects out of pure force, observe distant locations, and so on. To communicate with either of them, one must ascend to a hovering platform and don an adjustable helmet connected to a variety of cables and wires. The interaction isn't conversation so much as direct mental interface, which can be taxing. PCs in communication with either of the machine intelligences in the Ishallen must make an Intellect defense roll each minute or suffer 6 points of Intellect damage.

The Yellow God and the Blue God despise each other and seek nothing more than taunt, insult, and belittle the other. Trapped within the Ishallen together for all eternity, they use their almost limitless intellects and great powers to annoy and inconvenience each other. Destroying or harming the other is impossible without the destruction (or harm) being mutual.

Visitors to the Ishallen are likely drawn into this disputation and bickering as soon as they arrive. Promised great rewards by one machine being to perform a specific task intended to belittle, denigrate, and confuse, or embarrass the other, newcomers are used as tools in the struggle of the "gods." Angering one or both of the entities can be extraordinarily dangerous. However, the rewards offered could be worth getting involved, as the machine intelligences have the ability to repair, reshape, or create almost anything, including flesh.[1]