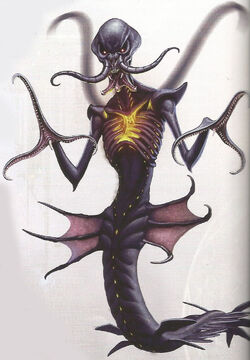 Inconae (Singular: Incona) are vampiric monsters that can feast on literally anything. These creatures scheme from the darkness of the Gloaming.

Creatures of darkness and terror, the inconae wormed their way into this universe from somewhere else: and otherworldly realm, it's said, that they devoured entirely.

Although some would think the inconae built the Gloaming, that seems to be unlikely. More likely would be that they influenced the so-called makers to fashion the megastructure and fill it with creatures upon which to feed. From the inconae point of view, that's all the Gloaming really is - a slaughterhouse of waiting cattle.

Inconae can alter their metabolisms and digestive systems to eat literally anything, but their default form of sustenance is blood. It's only when they can't obtain blood that they will then turn to other sources of nourishment, both organic and inorganic. Some people speculate that if need be, they will feed on spacetime itself, eventually consuming the whole universe.[1]

Hungers for blood (among other things)

The shadows of the Gloaming

Stealth and jumping as level 10.

The inconae hunt in packs, seeping out from the shadows to devour prey and then recede back into the darkness. They attack with tooth and claw, performing two melee attacks as a single action.

An incona can also use its action to mesmerize a foe. If the victim fails an Intellect defense roll, they suffer 2 points of Intellect damage. Until those lost points are restored, they're both confused and disoriented, and the difficulty of their actions is increased by two steps. During this period of confusion, an incona can make a subtle suggestion and the victim will follow it, believing it to be their own idea. The suggested action can't be something they would normally do, so committing suicide or murdering a friend are likely right out. The inconae always use far greater subtlety, their plots and plans much more convoluted.

Inconae can see in complete and utter darkness, and despise bright light. The difficulty of an incona's actions within bright light is increased by one step.

If an incona happens to touch an Archadian mote, the incona will suffer 5 points of damage, but the mote will be consume in the process.

Inconae consider all other lifeforms to be nothing more than prey or feedstock. And they simply don't entreat to feedstock.

Inconae make excellent villains, and because they work in groups, they can be a direct challenge for even the most powerful of PCs.[2]