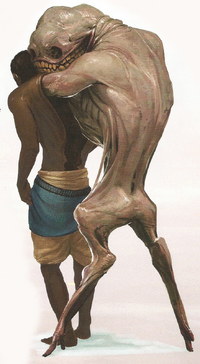 If seen in their undisguised state, idolum are the color of ash or even a corpse. About the size of humans, they're often mistaken for humans because they steal the skin from their victims and wear it like clothing in order to learn more information, insinuate themselves into communities, and find more victims for their friends. Without a stolen skin, they;re revealed to have wide mouths, dead eyes, and a cadaverous sin slick with a kind of poison that dissolves the underlayers of a living creature's flesh.

Idolum can produce a wide variety of poisons. In addition to secreting a toxin that can cause a living creature to shed its skin, it can breathe out a special poison that cause creatures to forget what just happened, making them easier to control and heard.

No matter how good an idolum's disguise might seem, and how well they've learned to mimic the traits of those they're passing themselves off as, it's still hard for the creature to keep its stolen skin smooth and not suspiciously gathered here and there like some ill-fitting garment.[1]

hungers for flesh, to infiltrate society

Usually within communities, in groups of two to four

Tasks related to disguise or deception as level 7

An idolum prefers not to enter combat, but to take on lone victims by surprise, hopefully with the aid of another of its kind. An idolum can also batter its target, but it prefers instead to utilize its poison.

'Breathe Poison:' An idolum can breathe out a white plume of poison at a target within immediate range. If the target fails to defend itself, it takes 4 points of Intellect damage (ignoring Armor) and loses its next turn. If the target takes any damage from this poison a second time during the same combat, it must resist losing its memory of the previous few minutes of its life, including being attacked by the idolum.

'Skin-shedding Poison:' This toxin is a secondary effect of repeated uses of the inhaled poison. If a target descends one or more steps on the damage track because of Intellect damage, they begin to take 4 points of Speed damage each round (ignoring Armor) until they improve at least by one step on the damage track (though recovery, healing, or some other method). A creature that dies because of this toxin sheds a perfectly good skin that the idolum can utilize to disguise itself as that victim, or at least some other creature of the same kind.

Idolum are intelligent, but their first priority is eating. They may mimic victims, pretend to be their victims, and even seem to help others, but only in pursuit of a deeper agenda and motive, which is hunger.

More and more people in a particular community or area of a city have begun to act strangely, and the community leader wants someone to investigate if there's something in the water or food, or some other influence at play.[2]

Some Aeon Priests believe that the idolum are intruders from an alternate reality.[3]