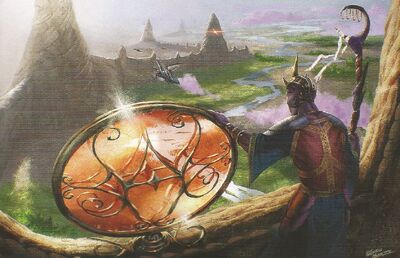 Members from the order of Tinkers can be found all throughout New Yenth, but not as many all in one place as in Hoyan, where the order itself is headquartered. Located many miles away from the Earth Trade Settlement, the Tinkers here have access to the largest of workshops with specialized insect "crops", as they're called, to help build their varying creations. Though seen as oddities in the base dimension, most of them are designed to help the average colrath achieve the meditative state they so desire. Meditation focuses end up being devices that generate pleasurable sounds, emit trance-like lights, and move around in ways that absorb attention, among many other traits.[1]

The settlement itself holds about a thousand colrathi as its residents, half of which belong to the order of tinkers. Some Tinkers choose to never leave Hoyan, while other decide to travel with Traders, working together with them in order to distribute their wares.On occasion, Tinkers will be asked to design special devices for specific purposes that don't have anything to do with colrathi meditation. These particular tasks can even be considered exciting and challenging, causing Tinkers to compete with one another in order to be assigned one.

The eldest tinker that happens to operate in Hoyan is a female colrath named Caza Tinker Forthy-Three. Within one year, Caza must resign and concede to her Forty-Four, but she isn't ready to go just yet. She happens to be far too fascinated with her craft and also believes her daily meditations can keep the infamous crawling one transformation at bay. However, she has yet to tell anyone this, as that would only alert the Census Takers. Instead, she plots to escape through the portal leading to the Ninth World.[2]