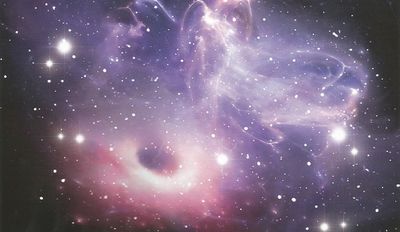 The Haunted Cloud is a weird region of space at the rim of the Milky Way galaxy.

A mass of dust and gas lurking in the void, the Haunted Cloud is known to only a few midnight pilgrims that dare travel into the night. A trillion miles across, the cloud is vast and strange. Passing through this region of space can have two effects:

The first is a loss of substance. A single object or person slowly becomes less and less tangible. Once it's entirely insubstantial, it eventually fades from sight as well and is gone forever. The objects or creatures affected by this Evanescent effect seem entirely random.

The second effect is an infestation of incorporeal creatures known as the Eulm. These creatures give the cloud its name, because they seem very much like ghosts. They might appear in a starfaring vessel passing through the cloud and take up residence, so to speak, within the same space as an existing creature or object. Eventually, they take on the essence of the creature or object, "possessing" it and - if the creature or object is lower than level 5, or if a PC fails an intellect defense roll - controlling it, if applicable. A powerful jot of energy (something that's level 5 or higher or that inflicts at least 8 points of damage) drives the Eulm out of whatever it possesses.

Near the center of the Haunted Cloud lies an interstellar vessel called the Rosenant, piloted by a man named Quientan. He visits the region in order to study its strange effects and negotiate with its inhabitants. A quiet megalomaniac, Quientan seeks to return to his homeworld with a secret he can glean from the cloud that would make him powerful or even give him an edge against his enemies. (An army of Eulm allies or slaves would certainly suffice.) He won't speak of his home to others under any circumstances. Although he appears to be human, he isn't from Earth.[1]