Currently about 500 people live within Guralason. They're led by a human female of the 24th rank, named Tyrrea Uol. Tall, long-nosed, and bearing high cheek bones, Tyrrea's an active leader who's fit enough to go out on hoovra hunts alongside other hunters from the city. She's married to a female human weaver named Idelia Uol, who can make clothing out of spun filament threads.

80 of the residents are hunters and gatherers, around 40 are bone miners, and the rest mainly consist of crafters and artisans, guards watching out for threats like navarac assaults, and those to care for their very old and very young. Aside from throwing the occasional festival that includes athletic competitions among other games, Guralason citizens usually have very little time for luxuries like extensive recreation or scholarly work. In addition, religious and philosophical pursuits are rarely conducted and the people have very little experience in dealing with the numenera. Instead, they're more aware of a plagued enclave, which supposedly rests only a few miles from their position, as well as on the lookout for any spies, saboteurs, and/or infiltrators with which to execute. A hard task for many, considering that many of these "plagued" were once former citizenry of Guralason. One of these is a male human hunter known as Feazon Orriel, who has yet to be discovered by the city authorities. 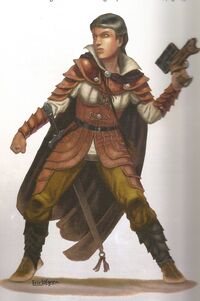 Feazon will occasionally sabotage different portions of Guralason, enough to keep many of the crafters and builders constantly repairing while also not enough to bring the entire city falling. Aside from that, he also dumps stores of food over the side of the city, sowing the seeds of hardship and struggle. Sometimes other plagued from the neighboring enclave will even cross over to help with this kind of endeavor. Tyrrea is already aware of a plagued infiltrator who could be responsible for all of this commotion, though she hasn't yet tracked down where it is, or even who.

Similar to the other hanging cities throughout the Swarmstar, there's little distinction between day and night, causing people to try and keep a similar period of activity within their daily cycles to help avoid falling asleep at different times. The only exception being the guards, which Tyrrea regulates. [1]