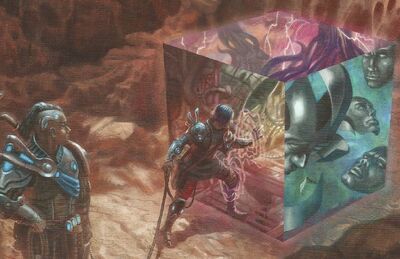 The Grinder of Infinities is an advanced device capable of allowing one to travel to different dimensions.

Several devices, each known as a Grinder of Infinities, exist throughout the Ninth World. Despite this, however, Aeon priests who've studied the matter believe that they're all manifestations of one single object. But the transdimensional object's many edges emerge in various realities. Each emergence appears to be a discrete item.

One instance of the Grinder of Infinities can be found within an obelisk from a prior-world structure that hangs above the foothills of the Black Riage mountains found in eastern Thaemor. The obelisk's bottom-most point is still a thousand feet above the rocky, mountainous ground. Gaining entry will require finding one of the three phase doors that lead to a series of tunnels and chambers. One chamber features a 9 ft. cube floating about 3 ft. above the floor. Each of the cube's 6 sides will open into the interior space that isn't share with any of the other sides - some sort of transdimensional effect in in play. Struts, components, and any other devices of clear technological significance fill the cube's center.

Entering the cube will the components to spin up to a lethal velocity, and the intruder must succeed on a difficulty 4 Speed defense roll or suffer 5 points of damage. This will continue unless someone succeeds on a difficulty 4 Intellect -based task and regains temporary control over the device. Once considered "safe", characters that are skilled in the numenera can discover its full capabilities. They'll also learn that the grinder itself is a shifting portal that leads to an infinity of alternate dimensions.

PCs must spend a few days studying and experimenting and finally succeed at a difficulty 7 Intellect task in order to activate the portal. If the attempt at all fails, they will need to roll on the Transdimensional Mishap Table. In addition to, the device will lose is "safe" status, regaining lethal velocity once more.

If the characters succeed, those within the cube will see each interior surface shimmer, revealing strange scenes (all sides except the one the PCs emerged from, which remains unchanged). The scenes can show clearly anything : incredible cities, floating mountains, never-before seen creatures, empty pink space, volcanoes erupting with sound, tornadoes, peaceful forests filled with bizarre trees, red waves crashing onto a beach with purple sands, etc. Moving through any one of these faces will transport one to a different dimension, the same as depicted in that particular face's scene.

An intelligent character that succeeds on a difficulty 7 task with the device can select any dimension they so desire, but only if they have specific planar coordinates or at the very least an exact description of the dimension in question.[1]