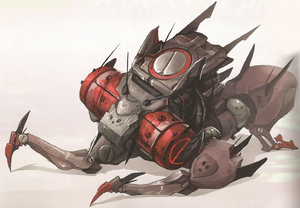 Griefsteels are depressed machines found in ruins throughout the Ninth World.

Whether encountered somewhere inside the depths of a lonely ruin or wandering across the empty landscape, the sorrow-wracked griefsteel is a machine that's unlikely to ever find solace. Crafted to serve as a companion to someone who died aeons before, these shambling automatons are forever heartbroken. Theough they're self-aware mechs that are able to learn, some still get stuck within a mental loop from they're unable to escape.

Unending sorrow thus makes them unpredictable. They're not usually a threat, but they're also not usually helpful. They're too lost in their own misery to either notice or care about other's needs. Sometimes, an anguished automaton strikes out in fury over their loss, and explorers who've disrupted their iterative depressive cycle make good targets - particularly those who remind griefsteels of what they've lost.[1]

To be left alone

Short (though some individuals can fly a long distance each round)

Ability to detect falsehood or pierce disguise as level 4, because they want to believe

A griefsteel can be one of many kinds of automaton, which means that different ones will bring different abilities in combat, though most prefer not to enter into combat unless they're provoked (and some, not even then). At minimum, a griefsteel can batter three or more foes within immediate range with their metallic limbs. Many can also emit an energy ray that inflicts mental damage on up to three targets within long range.

If any direct machine or mental communication is attempted, or any sort of interaction for that matter, the creature attempting the interaction experiences the trauma of the griefsteel's loss directly. Unless they can resist, they're stunned and thus lose their next turn.

Griefsteels might first ignore, then wail at someone trying at all to communicate with them. If communication attempts persist, they'll finally strike out at who or whatever is bothering them, unless the intruder is extremely persuasive and calming.

The characters who've learned that plans (or components) they want could be found within a crashed vehicle or ruin are stymied by a griefsteel that's using the place as a base of sorts. It must be mollified or deactivated for the PCs to gather what they need.

1d6 cyphers and 1 or 2 units of psiranium can be salvaged from a griefsteel's deactivated body.[2]

Sometimes a griefsteel can mistake a traveler for the one who originally built them.[3]