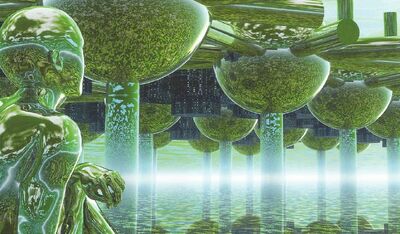 Garanthal is a planet filled with biomass, located in the Milky Way galaxy.

Verdant doesn't begin to describe the world of Garanthal. Teeming with life, the majority of the planet is covered in a shallow sea just a few feet deep. Within the endless coral reef live fish, crustaceans, cephalopods, and other creatures. A great deal of plant life of all varieties thrives in the the water as well. But as thick as the sea is with these flora and fauna, Garanthal is truly dense with living creatures that are just too small to see, except when in great numbers. The green vastness of these tiny single-celled creatures fills the shallow sea, the occasional rocky islands, and even the air.

Gravity on Garanthal is slightly less than on Earth, but the atmosphere is so dense with tiny living organisms that it's dangerous for any traditional beings (like humans) to breathe it. For every hour that non-natives breathe the air on Garanthal, they must make a Might defense roll or move one step down the damage track due to colonies of creatures filling and multiplying in their lungs.

The intelligent residents of Garanthal are the Clure, each of which is a colony in of itself for tiny creatures, all dwelling within a transparent force field taking the shape of a humanoid. The Clure dwell in cities that are likewise formed from force-shaped force fields that contain a wet, sticky biomass of a wide variety of organisms. The Clure swim within these force-field cities made of globes and cylinders of green life.

Without the aid of telepathy or something similar, communication with the Clure is nearly impossible. Still, if one wanted to find a cure for a disease or a way to deal with some other organic threat, the Clure would be more likely to know the answer than just about anyone else. Similarly, the Clure manufacture poisons that can kill any creature (as well as antidotes). Lastly, they design organic microorganisms that can preform almost any conceivable task, not unlike the nanotechnology found elsewhere. The Clure would be willing to barter any of these things for interesting cyphers or artifacts.[1]