Fortress of the Amber Monolith

The Fortress of the Amber Monolith is a large structure next to the landmark of the same name within the alternate dimension of the Whispering World.

The Whispering World's version of the Amber Monolith is still every bit as mysterious as the one from the base dimension, and just as difficult to enter.

A fortress now stands beneath the monolith, originally constructed as a means of defense against the holy site. A large dirigible floats over the fortress ( and beneath the much higher Monolith) moored to a gantry.[1] 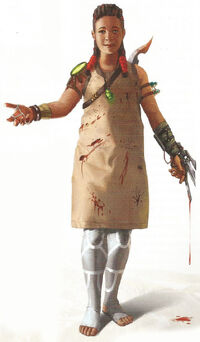 A female Aeon Priest by the name of Cadaralas has taken shelter within the fortress alongside 5 human helpers, and the priest's only automaton, loyal solely to her. Originally from the Durkhal inside Qi, the Aeon Priest now works around the clock to try and understand the whisper phenomenon. Cadalaras usually wears a white smock over her clothing, though it tends to be stained with blood from her ongoing experiments.

If normal people were to show up at the fortress gates, Cadaralas will let them in, and is the very soul of hospitality, though er human helpers are tight-lipped. She'll even go so far as to offer the characters a few of the innovations that she's developed, which she calls "sound shields". She explains that she and her small group are fortunate because they enjoy many luxuries, including food enough to last for several years, which was stored away back when the fortress housed many more.There's also a laboratory that Cadaralas works at, and which she'll be happy to show off. At any one time, she'll have 2 or more whispers lying along dissection tables, with various organs (including parts of the brain) extracted for study.

Cadaralas also keeps a few live whispers in soundproofed cells. In order to better understand the effects of their trigger phrase and the change, the Aeon Priest prefers to study the freshly exposed victims and watch them as they change. This is the reason why she has only 5 followers, which used to be 15 about a year prior. The bulk of her former helpers were sacrificed in the name of research. With the characters' arrival, the pressure to select her next subjects from the ranks of her own helpers has been relieved, If possible, Cadaralas will try to maintain her affable front while secretly trying to snatch one of the PCs for her experiments. If successful, she'll then select another PC, and so on. If her masquerade is revealed, she'll have her automaton attempt to subdue the characters and cage them to fulfill all her future research needs.[2]