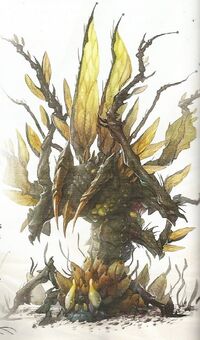 The Forest of Stingers is a deadly region of New Yenth that's covered in stinger trees.

This vast forest of stinger trees grows across much of the central continent. The tree branches resemble segmented limbs along which filmy, wing-like leaves will extend during the day. At the tip of each branch is a large stinger, shining with venom. Anyone that attempts to cut down or harm one of these trees becomes the target of several segmented limbs repeatedly stabbing until the threat is expunged.

The tall boles of the trees are actually carapace-covered stalks of giant boring insects whose heads are buried underground. They call out through earth via subtle vibrations that lure ground worms and insects into their maws. These "trees" also communicate with one another, passing information out regarding blights, intruders, and other news from one side of the forest all the way to the next in just a few short days.

Different trees have different venoms, which is something that colrathi order of Healers well understands. Many of the venoms can be harvested (by any order that specializes in doing so safely, the Venom Takers). Harvested venoms can be used to stop many kinds of illness, block chronic pain, both remove painful memories and restore lost collections, help regenerate lost limbs, and so much more. Of course, collected venom can also be used to kill.

Hundred of Venom Takers work the edges of the Forest of Stingers. Each day, they'll sell their venom, collected in large sack-like glands, to healers that come from all over New Yenth. During the evenings, the Venom Talkers relax, watch the stars, and sometimes imbibe diluted poisons known to induce euphoria.[1]