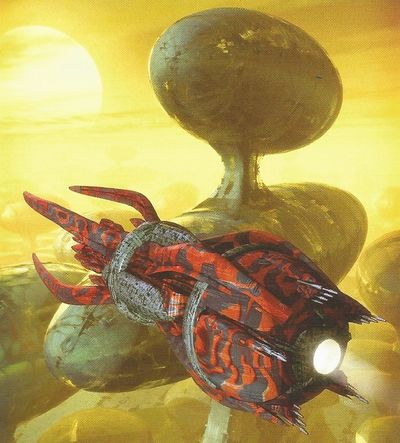 Farundiel is a world in the Milky Way galaxy that is linked to another dimension.

Farundiel is a populous world, and its people have advanced technologies and understanding of mechanical science. They have craft that fly through the air at great speeds, machines that think and teach, and devices that service needs and provide extravagant comforts. The technologies of Farundiel, however, are nothing like anything found in the Ninth World. The parts and pieces don't interface with anything the PCs likely brought with them, and numenera knowledge provides little insight in dealing with Farundiel things.

The people of Farundiel practically look like humans, other than that their skin is instead a ruddy pale color, and that their hair's always white. They call themselves the Farun. The Farun live in weird, globular cities and can negate the effects of gravity with ease, flying through the sky in gleaming craft of metal and synth. The people are divided into hundreds of fractious groups, each with its own leaders. Skirmishes, raids, and struggles among these groups are common, and the weapons the Farun wield are as potent as any Ninth World ray emitter, detonation, or offensive artifact.

Farundiel is also a world next to a strange hole in Space, through which leaks ultraterrestrial energies unknown in this universe. All of the Farun's machines and devices draw energy directly from the anomaly and don't function anywhere else other than on Farundiel. Thus, Farun never leave their homeworld, and it's not a particularly good place for Ninth Worlders to come to gain new cyphers or artifacts.

Regardless, explorers may still wish to visit Farundiel because of the anomaly itself. It's a doorway between our universe and the universe of a species called the Nibovians. Nibovians can't leave their universe under any circumstances, but they can send their creations through for mysterious (and certainly malevolent) purposes without the use of the anomaly. However, the hole in space is the only known way for people of our universe to get to that other universe, should such a journey ever wish to be attempted. Because of the anomaly, Farundiel is as plagued by the treacherous creations of the Nibovians as much as the Ninth World is, if not more so.[1]