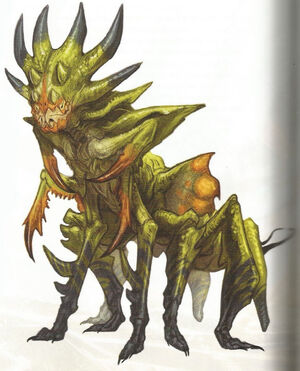 Exics are huge green, chitin-covered insectoid creatures with an impressively armored head and a dozen or so barbed legs. Exics aren't automatically aggressive to other creatures of heir size, unless attacked. Otherwise, they're happy to eat away at whatever source of food they've selected. Exics who go without food for more than fifty hours stop moving, spin a green cocoon around themselves, and and cast themselves like seeds on an extradimensional wind. Many end up in locations in alternate dimensions that are equally devoid of food, but some discover dimensions where they can eat and reproduce with little interference. More than one limited dimension is completely shot through with an exic infestation tens of millions of years old.[1]

When attacked or prevented from getting a source of food, exics spray a caustic, sticky web at the target within short range. Creatures struck by the web suffer 5 points of damage from the acid and are stuck to it for one round (thus the target loses its next turn). Once one exic becomes embroiled in a conflict, other nearby exics are drawn to the fray, in ones and twos, for as long as the combat lasts.

Exics usually communicate via subtle scent trails, which another exic must climb across to decipher. Exics have the intelligence of a clever carnivore, though sometimes far smarter individuals can be found leading a group of others. those that are much smarter than others of their kind can also produce cypher artifacts to use either against the character, or as a means of communicating with the character.

An exic cocoon appears in a nearby forest. It discharges a dozen or so exic eggs, which hatch and release young that begin to eat the forest, one tree at a time, from leaf to root. A nearby village relies on special ingredients gathered in the forest to make special medicine for its elderly citizenry, and looks for a solution to the infestation.[2]

Several exic infestations can be found inside the bizarre dimension of Reeval.