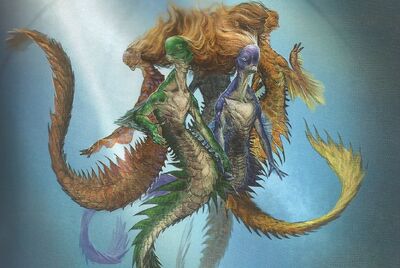 The Evolo Sphere is a special room within the underwater city of Joria.

Within one of the large, globular structures, at the forefront of Joria, lies a chamber holding only an object known as the evolo sphere. Constructed from translucent metal and filled with some unknown cerulean fluid, the sphere contains five humanoid creatures known by the jorians as vunds. The vunds are all connected to one another via their long strands of yellow hair. Jorian legends say that they braided their locks with one another a long time ago, and since then, they swim slowly together in an inner circle. Many consider them the keepers of Joria's history as well as the guardians of both its past, present, and future. However, no one knows either their names, their ages, or even how to really communicate with them. The only thing people do understand are their changing color combinations. Each of their color combinations supposedly represents a pattern to complex to be normally understood.

While in the past, it was believed that everyone could understand the vund's color-based language, currently only one male human by the name of Kinderi can. As elf-proclaimed expert on the vunds, Kinderi was actually born within Joria and decided to continue his stay, even when his family had returned back to the mainland. Ever since he was a child, Kinderi has kept intricate notes on the vunds' hued patterns, believing he's cracked at least a few of the most basic ones. According to Kinderi, whenever vunds "1" and "2" are both blue while the rest are orange, it means that city will be rising toward the surface. If vunds "3" and "5" are a greenish color and "1" is purple, then the granthu which the city rests upon is starting to molt. Over 267 color patterns have been recorded and interpreted by Kinderi, even if he doesn't entirely know what they truly mean.

Rumor has it that the vunds only live within the evolo sphere and that to open it would doom both them as well as the entire city. While this is often regarded with ridicule, the superstitions regarding this belief still run deep throughout the city and few inhabitants are likely to test this theory. Those that do will more than likely come across a bloom of amphibious jellyfish-like creatures, who guard the doorway to the evolo sphere's only portal, day in and day out. So far, they're the only creatures that can enter and exit the sphere at will. Electrical currents run along their tentacles and can be turned on or off at a moment's notice. Those who try to enter, or even touch the sphere, quickly provoke the swarm. [1]

Whenever Jorians encounter visitors who happen to speak a new, unique language, they'll usually ask the visitor(s) to record the kithkind message in their tongue and then add it right at the end of the overall broadcast. This tradition will allow practically anyone to hear and understand it. [2]