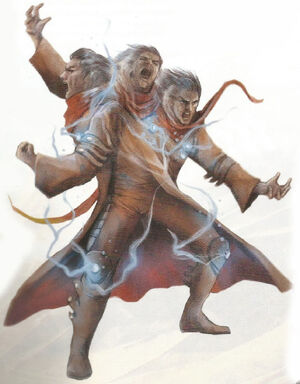 At least one prior-world civilization ascended to a higher plane of existence. However, there were a few stragglers. A least, that's the explanation Aeon priests have for ether ghosts; higher beings who either failed to reach or ere thrown from whatever dimension their fellows discovered. Rebuffed, they fell back into the normal dimensions of time and space. Ether ghosts mimic the outline of whatever creature they encounter, but that shape constantly warps and jumps, as if reality itself struggles to resolve several alternate versions of the ether ghost into a coherent being. If Aeon priests have correctly interpreted ether ghost motivation, they were maddened by whatever process separated them from their kin. They take all that anger and madness out on dimension walkers (or other beings involved in transdimensional events) that they happen across.[1]

Tasks relating to dimensional knowledge and travel as level 10.

An ether ghost's attack is a touch that induces visions of several alternate realities simultaneously, inflicting 6 points of intellectual damage. A creature who takes damage must also succeed on an Intellect defense task or suffer a transdimensional mishap (as randomly determined on the Transdimensional Mishap Table). Some effects on the mishap table can be interpreted as sending a victim to an alternate dimension. If this effect occurs, a rip in space appears between the two dimensions. The rip remains open for several minutes, which might be long enough to rescue a character so affected.

An ether ghost might bargain with its victims if they offer help to transcend to a higher dimension, but if that aid doesn't materialize quickly, the ether ghost returns to its earlier behavior of sowing destruction and discord.

A man and his followers set up a small shrine outside a village and claim to be adherents of a god of death and destruction. they demand sacrifices from the village, or claim their god will arrive and and kill everyone at one go. The "god" is an ether ghost that sometimes appears at a local thin point in space-time.[2]