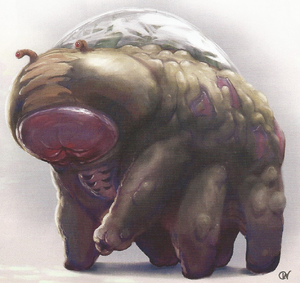 Esculants are bulbous devourers of synth and flesh alike that reside within the Ninth World.

This irregular mass of not-quite-flesh is the color of drit and iron. It stands about 9 ft. tall, lumbering on half a dozen projections that resemble long-healed, amputated stamps. Scents of oil, rubber, and strong chemicals pervade the area where an esculant is active. Esculants usually prefer dark ruins, basements, or even the outer edges of a settlement's walls at night. Synths and metal draw them, but as does the flesh of living things.

Sometimes esculants don't try to eat the creatures they encounter. Instead, esculants follow them for a time. For what purpose, no one really knows.[1]

Hungers for synth, metal, and flesh

An esculant attacks a living creature by attempting to topple onto it. If successful, it inflicts damage and the target becomes stuck underneath until the victim can pull itself free. Each round the esculant remains in contact with the victim, the victim takes an additional 5 points of damage from tiny, mouth-like intake channels that abrade the victim's body. (The creature uses this same method to devour inanimate objects of up to level 5.)

Esculants are predatory, but not especially clever. It's possible to avoid a conflict with one simply by getting away from it, after which the creature seems to forget, returning back to whatever it was doing prior to the encounter.

The PCs open a vault, a neighborhood home, or a storage room only to discover that one or more esculants has consumed everything inside.[2]