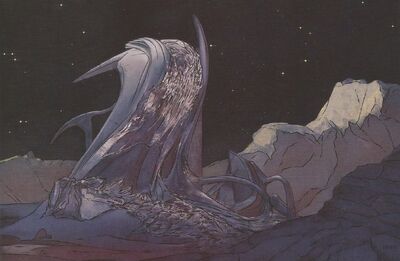 The Empty Embassies are vacant structures located within the moon's past.

Approximately 12 in amount, the so-called Empty Embassies stand like beacons above the dry, crater-filled plains and rocky lunar mountainscapes. One simple glance is what's needed to realize that no human was responsible for their construction. Twisted, asymmetrical, and grotesque in appearance, these twisted metal structures are coated in an array of strange crystalline formations slowly growing and spreading all across their surfaces like a pox along each embassy's outer surface.

Within each one lies multiple storehouses of technology. These caches can contain 2d6 cyphers and 1-2 artifacts, all based on crystals. Finding one is considered to be a difficulty 7 task and will take many hours ton complete, assuming one is looking carefully.

Because the embassies don't exist in the moon's present, some explorers have presumed that the people from one of the prior worlds - most likely that same ones who built the Lunar Ring or other concurrent structures - had destroyed them for some reason. It's also likely. however, that they were claimed by the passage of time, although forces of decay tend to work slower on the moon's surface.

It should be noted, however, that any of these embassies aren't truly empty. Rather, they're inhabited and sustained by creatures called huluraloch, who were sent by some powerful alien intelligences from the other side of the galaxy. Huluraloch are beings of pure perception, and the embassies are actually like massive circuits that contain them just as how seawater contains salt. Complex devices of crystalline nature run throughout the framework of these structures, providing the huluraloch with a fourth-dimensional space from which to observe the Earth.

The only known way to facilitate communication between them is by resting within one of the embassies. During this period, the sleeper will have a lucid dream, which will have them seeing a huge, floating, insubstantial eye. If it's treated with respect, the huluraloch will speak in the dreamer's language, otherwise the dream will simply end.[1]