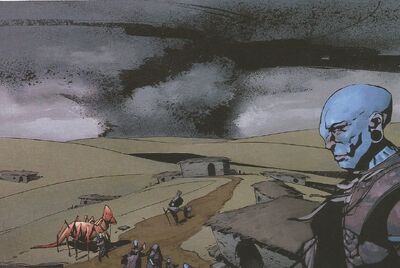 The Ellaticurids are a prominent humanoid race on the world of Naharrai.

While they may superficially resemble human beings, Ellaticurids are usually taller, lankier, and have a bluish tinge to their skin. Most Ellaticurids, both Male and female, also routinely will remove all traces of hair on their bodies.[1]

Similar to humans in the Ninth World, while their general level for technology and advancement is low, they still have access to the devices and weapons of the past. Though, unlike humanity, the ellaticurids hold very detailed records of their history, back in era when their ancestors were well versed in the sciences and the numenera. They don't view the latter with any mysticism and lack any real taste in religion.

A civilization in decline, the skill they once had for wielding advanced technologies has now become lost to them. On occasion, an individual will make a breakthrough and restore an old device or even figures out a process from ages ago. But as time passes, such discoveries come about less and less. While ellaticurid records describe historical events, they lack any technical issues (at least, not in manner that current people could comprehend).

None of their records mention anything about Earth, but most ellaticurids believe that their far-distant ancestors originated from there. This raises questions however, as, for this to be true, their ancestors would've arrived a million or more Naharrai years, and the ellaticurid's histories only go back only 10,000 years or so.

Many ellaticurids tend to be grim and cynical, well aware of their dying race and homeworld, especially since there doesn't seem to be anything they can do about it either. Despite their not having any superstitious beliefs, the ellaticurids are far from emotionless or impractical. The ellaticurids hold a passionate obsession for their stories, whether they be translated in to song, written into books, recited out loud, or even conveyed through theatrical presentations.

The typical ellaticurid village is built from low stone buildings, all of which hold their own underground shelters from storms. Most ellaticurids will attempt to raise crops or tend to herds of local wildlife, but this kind of work tends to be frustrating and difficult, and just gets harder year by year. Voranochs are used as draft animals and mounts. 1-2 ellaticurids within a village will most likely operate and understand some kind of numenera device. It's always different and sometimes practical (usually in the form of either a weapon, a protective device, something to produce or build homes, tend crops, etc.), though other times the device will happen to be frivoulous, - kinda like what a Ninth Worlder would consider to be an oddity.

There are few ellaticurids cities, but even still, those cities tend to be relatively small in size. [[Taranhall, with its population of around 10,000, is considered a vast metropolis by their standards. Warriors guard the cities from stout, stone fortresses and patrol the borderlands near ghru territory. Said warriors will also ride voranochs, which are often mounted with repeating crossbows built into their saddles. Soldiers will prefer long-ranged melee weapons like spears or polearms, and adorn themselves with heavy armor. Their armor is also usually stylized to give them the appearance of a dangerous Naharrain animals - serpents, toothy retiles, frightening birds, etc.[2]

War with the Ghru[edit | edit source]

A great enmity exists between the ghru and the ellaticurids. While their lands are normally a good distance from one another, open warfare will still erupt between them from time to time, with one side or the other performing raids or encroaching into the territory of the other. While ghru command a higher amount of technology, the ellaticurids still outnumber them 10:1.[3]