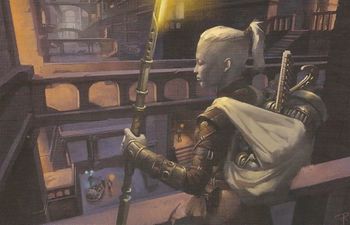 Eleens are a humanoid race native to the Endless Abode.

Eleens look very much like humans, but living without natural light for generations rendered them pale as milk with lanky white hair.[1]

Eleens speak their own language , though hints f the Truth suggest contact with people from the Ninth World.

Eleens are a nomadic people. They wander through the corridors of the Endless Abode in regular migrations, composed of groups of 50 or more, based on the direction's of each band's navigator, a position in their culture that roughly translates to "prophet-chief".No single navigator has authority over more than the eleens contained with their own band, though sometimes politics will cause groups to combine with each other. While they explore, Eleens will scavenge for any food, items of interest, devices that also appear to be interesting. While their technological level is low, each member of each band is still usually equipped with one or more cyphers, oddities, or even artifacts.

Eleens regard the corridors of the Abode and the items found within as being magical, left by the spirits, as they say. They don't realize that they may actually inhabit an artificial construct that grows without bound through some kind of transdimensional engineering gone wrong. For the eleens, the spirits of room and corridor are all that's needed to understand.

Eleens hold regular prayer sessions, beseeching the countless spirits of the Endless Abode to guide them to fresh "gifts" and deliver them from the enemy, a beast known as the Hunger in the Halls. As long as the eleens don't forget to inscribe an eye within a large, geometric design, those prayers are almost always answered in that area. Eleens don't know where this symbol came from specifically, and instead believe to be a gift from the spirits.

Rivalry within as well as between each band is encouraged, so long as it stays within certain bounds. Competitions will involve, grappling, racing, and even sacred hunts. Sacred hunts are games where the participants will locate items within a predetermined period. Even eleens who aren't directly involved in such competitions will enjoy taking bets, regardless. Winnings are counted in shins, oddities, and sometimes even cyphers. Oddities and other devices that provide light are especially prized by the eleens, considering that many corridors within the Endless Abode aren't illuminated.

Given to long silences and introspection while they walk, the eleens are a thoughtful people. But that shouldn't be mistaken for dourness. When a band decided to stop to rest, musical instruments are brought out, songs spring forth and lamps are lit, and after prayers, competitions are announced. Guards are set to watch for wandering threats, which sometimes emerge even from previously explored chambers.. They'll also keep an eye out for the one threat that even prayers can't protect them from: the Strangled Rooms, where smothering webs expand further each day, and lycidarises emerge to hunt.

The navigator also tracks time , a very difficult time in a place lacking both day and night. Once every "span"(a period of time approximately equal to 3 months), the navigators of each band will turn the eleens toward the Room of Echoes. The Room of Echoes is miles in diameter, beneath a ceiling where great devices shine light bright enough to illuminate the entire, massive chamber. Here the bands will mingle with one another, share news, and even trade. This event is referred to as a Meet and will last for several days. Meets will also include competitions, marriages, and other events designed to strengthen the bonds between bands.

Whenever PCs or any other newcomers are encountered, an eleen band will treat them either as they would any other band of their own kind, or as a dangerous threat if they appear to be menacing. If language barriers are overcome, a band will offer trade opportunities, information, and even potential guides for the Abode. If the PCs seem at all particularly friendly, the eleens may even offer one or more of them the opportunity to join them and become assimilated into a band.[2]

An eleen band of nomads led by a navigator named Margena is known for playing musical instruments called thallans and being especially good at sacred hunt competition. When two bands meets in the halls and choose to compete in a sacred hunt, more of ten than not, Margena's band wins out. As is typical for such competitions, the winning band will keep all the items it recovers as well as those recovered from the losing side. If PCs were to encounter members of Margena's Band, they'll likely hear them playing their thallans first, and may even come across them scavenging for items to complete the latest sacred hunt.

A man from Qi named Difenum accompanies Margena's Band as a full-fledged member. He joined a few years back after becoming lost within the Quiet House. Difenum is paranoid, because he was previously on the run for his many past crimes. If he sees the PCs, he'll assume they must be there for him, and will plan to eliminate them as quickly as possible.[3]

A thallan is a musical instrument made from assembled bits of synth, creating a medium-sized hand drum.[4]