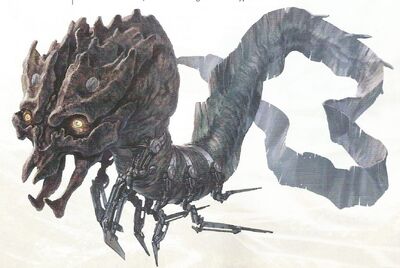 Eldmorem are dimension-traveling destroyers that arose in a distance parallel dimension. Half-living, half-automaton, eldmorem lie in cysts between dimensions, waking from the sleep of ages only when disturbed. When that happens, a lone eldmor stretches to its full 200 ft. length and attempts to destroy everything it encounters there.[1]

Destroy transdimensional travelers and their planes of origin

When "encysted" between dimensions, eldmorem appear as inanimate, weathered boulders the size of small mountains. Upon waking, they unfold to reveal their true shape. Though large, eldmorem can easily discern prey much smaller than themselves. Sometimes the eldmor can summon a dimensional duplicate of the character, which is similar in most ways except the duplicate is bound and determined to kill the character.

An eldmor's primary weapons are its eyes, which emit twin blasts of destructive transdimensional energy at targets within 5 miles, inflicting 1 points of damage that phases past protective gear (and thus ignores Armor).

Eldmorem can also catch a target that fails a Speed defense task in it s manipulators. If the caught target fails an Intellect defense task on the subsequent round, the target is ejected from the current reality and into some random dimension. the random dimension where victims of eldmorem sometimes find themselves aren't necessarily immediately dangerous, though they can be. The more significant problem for victims, however, is usually find a way back home.

Eldmorem can communicate telepathically, but mostly choose not to. They're odd, weary, and usually motivated to act only because of ancient instructions.

The PCs, traveling across the dimension, discover a few months later that an eldmor completely destroyed a location they visited briefly, this plus a few related clues that something very powerful is slowly hunting them across dimensions.

An eldmor corpse can be salvaged for 2d6 cyphers.[2]

The random dimensions where the victims of eldmorem sometimes find themselves aren't necessarily immediately dangerous, though they can be. The more significant problem for victims, however, is usually finding a way back home.[3]