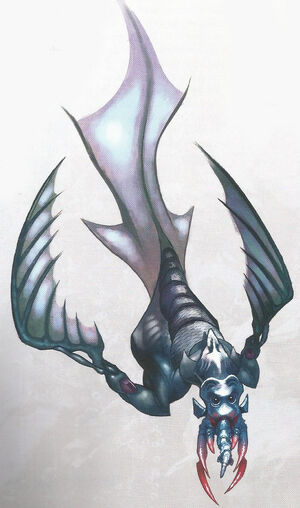 Like the shadow of a shadow, an ebon slips through the water soundlessly, noiselessly, and nearly imperceptibly. Streamlined and sleek, they're designed to be the perfect hunters. They can move from a still float to a prey-dive in less than a second, thanks to their elongated, finned arms and strong tails. They hunt and eat almost constantly, as they require large amounts of food, particularly fat, to fuel their revving metabolisms.

Ebons fight among themselves constantly for power, position, and the best bits of food. They often start eating their prey before it's completely dead to ensure that they get the choice bits before another member of their pack swoops in for a steal. Additionally, the sooner they eat after an attack, the more of their own poison ingest, which temporarily increases their toxicity.

In some areas of the world, ebons are a myth, a bedtime story to scare children. In those stories, they're called death shades[1]

Anywhere in the ocean, but particularly in the Deep Dark

Speed defense as level 5 due to quickness; stealth as level 5

Ebons hunt in loose packs of two or three creatures. When they see or scent something they desire, they zoom toward it, wrap their finned arms and tails around it, and then sting it repeatedly with their poisonous vibrissae.

In their first attack, ebons wrap and poison their prey. If this attack is successful, they inflict 1 point of damage, and the poison inflicts 5 points of additional damage (unless the victim makes a successful Might defense roll). Either way, the ebon's grasp increases the difficulty of the victim's next action by one step. In subsequent rounds, ebons bite grabbed prey for 5 points of damage.

As the player characters are engaged in some other activity, they begin to get the sense that someone or something is following them through the water. That sense continues to grow stronger as an ebon hunting pack sidles ever closer.[2]